Home / News / Season Three of ‘All or Nothing,’ Featuring the Dallas Cowboys, Premieres Friday, April 27

Season Three of ‘All or Nothing,’ Featuring the Dallas Cowboys, Premieres Friday, April 27

Jerry Milani March 1, 2018 News, On The Air Comments Off on Season Three of ‘All or Nothing,’ Featuring the Dallas Cowboys, Premieres Friday, April 27 1,876 Views 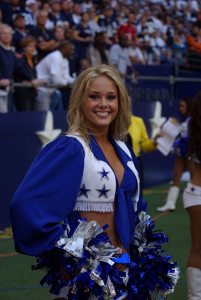 Amazon today announced that season three of the Emmy-winning docuseries All or Nothing, a Prime Original series produced by NFL Films, will launch on Friday, April 27. All or Nothing: The Dallas Cowboys, once again narrated by Emmy-winning actor Jon Hamm (Baby Driver, Mad Men), follows the Cowboys through their tumultuous 2017 season, which they enter with Super Bowl aspirations and exit with disappointment, one game short of the playoffs after a rollercoaster of controversy and emotion. All eight episodes will be available for Prime members on April 27.

All or Nothing, winner of the 2017 Sports Emmy Award for Outstanding Serialized Sports Documentary, is the first series to take viewers inside the locker room, on the sidelines and off the field for an unprecedented look inside an NFL franchise’s complete season. Season three, All or Nothing: The Dallas Cowboys, begins with much reason for optimism. Owner Jerry Jones has been elected to the Pro Football Hall of Fame, the team is operating out of its glistening new headquarters in Frisco, Texas, and head coach Jason Garrett is the reigning NFL Coach of the Year. But a cloud hangs over everything: after a yearlong investigation, running back Ezekiel Elliott has been suspended for six games by the NFL for conduct detrimental to the league. The team never quite finds its footing, alternating between winning and losing streaks.

Being the Dallas Cowboys means being the center of the NFL universe in good times and bad. The Elliott suspension, the team’s response to the players’ social justice protests during the national anthem, and even the fortunes of Jerry Jones’s grandson – a star Texas high school quarterback – dominate national headlines. It all adds up to a wild season even by the lofty standards of America’s Team. And NFL Films is there for it all, providing the immersive coverage that has made the Emmy-winning All or Nothing a new gold standard for all-access sports programming.

“We are excited to announce that the third season of All or Nothing will feature the Dallas Cowboys. One of the best known and most captivating teams in the NFL, the Cowboys have a rabid fan base,” said Heather Schuster, Head of Unscripted, Amazon Originals. “This season will once again provide Prime members with incredible access, compelling drama and plenty of football action to entertain fans until next season.”

“We are thrilled to have the Dallas Cowboys as the featured team in the third season of the Prime Original series All or Nothing,” said Maryann Turcke, President of NFL Media. “An enormous amount of thanks goes out to the Cowboys organization for their cooperation in filming throughout the season. The team at NFL Films continuously delivers high-quality, engaging content for viewers, and through our collaboration with Amazon, the third season of All or Nothing will give football fans incredible access into one of the league’s most iconic and celebrated clubs.”

The April 27 launch of All or Nothing also coincides with the 2018 NFL Draft, which will take place Thursday, April 26 through Saturday, April 28 in Dallas, TX.

Here’s what customers are saying:

Produced by NFL Films, All or Nothing: The Dallas Cowboys is executive produced by Maryann Turcke, Ross Ketover (Hard Knocks, Inside the NFL), and Pat Kelleher (Hard Knocks, 30 for 30 – The Two Bills). The showrunner is Keith Cossrow (A Football Life). Directors are Shannon Furman, Jay Jackson, Steve Trout, and Terrell Riley. Supervising producer is Bennett Viseltear and senior producer is Nick Mascolo.

Prime members will be able to stream the series via the Prime Video app for TVs, connected devices including Fire TV, mobile devices and online at amazon.com/allornothing. Members can also download the series to mobile devices for offline viewing at no additional cost to their membership.

Customers who are not already Prime members can sign up for a free trial at www.amazon.com/prime. For a list of all Prime Video compatible devices, visit www.amazon.com/howtostream.

Tags all or nothing amazon prime cowboys football nfl

Jerry Milani is a freelance writer and public relations executive living in Bloomfield, N.J. He has worked in P.R. for more than 30 years in college and conference sports media relations, two agencies and for the International Fight League, a team-based mixed martial arts league, and now is the PR manager for FAN EXPO, which runs pop culture and celebrity conventions across North America. Milani is also the play-by-play announcer for Caldwell University football and basketball broadcasts. He is a proud graduate of Fordham University and when not attending a Yankees, Rams or Cougars game can be reached at Jerry (at) JerryMilani (dot) com.
@gbpackjerry
Previous NFL Network to Broadcast AFFL Live in 2018
Next “Life Jackets for Children” Video Debuts on America’s Boating Channel