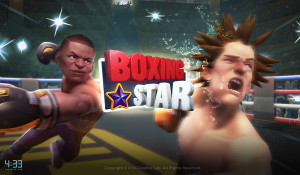 Pre-registration has been opened in US, UK, Japan, Hong Kong and 136 countries around the world. Eager players who pre-register will be rewarded with a variety of exclusive in-game items like 200 Gold, 1000 Coins. And Joe King’s rare edition boxing gloves, plus Tattoos for your boxer. All rewards will be awarded once Boxing Star launches on the App Store and Google Play.

Developed by 4:33, Boxing Star features an immersive story mode in which players fight through multiple tournaments and unique venues in their quest to become boxing’s World Champion. Players can improve their boxer’s core skills through a skill-set upgrade, where they can master their jab, hook and special moves to knock out their opponent.

The game’s music features 4 powerful Hip-Hop music from three underdog rappers. C.Cle, C.Swag, Pinnacle TheHustler and BOiTELLO each added their own swag to Boxing Star’s soundtrack that keeps players pumped throughout the fight.

Boxing Star will be launched on both Android and iOS platforms in 140 countries on July 12.

Jerry Milani is a freelance writer and public relations executive living in Bloomfield, N.J. He has worked in P.R. for more than 30 years in college and conference sports media relations, two agencies and for the International Fight League, a team-based mixed martial arts league, and now is the PR manager for FAN EXPO, which runs pop culture and celebrity conventions across North America. Milani is also the play-by-play announcer for Caldwell University football and basketball broadcasts. He is a proud graduate of Fordham University and when not attending a Yankees, Rams or Cougars game can be reached at Jerry (at) JerryMilani (dot) com.
@gbpackjerry
Previous CBS Sports presents the 100th PGA Championship: The Ultimate Bracket
Next Minor League Baseball, ISM Connect Partner For Fan Engagement