Angels’ Mike Trout voted onto Card No. 1 for 2016 Topps® Baseball 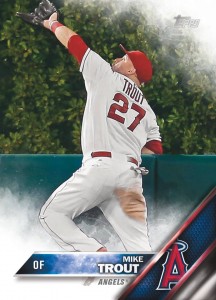 After thousands of online votes, Major League Baseball fans chose who should be on Card No. 1 for 2016 Topps® Baseball.

“It’s awesome. I appreciate the support from fans across MLB,” said Trout. “It’s pretty special to be the No. 1 card for Topps.”

Yet, all his home runs and awards aren’t the only things that have drawn fans to the New Jersey native. The 24 year old has an infectious smile and plays the game with passion that is only matched by the joy he brings MLB fans.

“The first card in the Topps baseball set has historically been given to top players or has been meaningful,” said David Leiner, VP & General Manager of North American Sports and Entertainment for Topps. “This time around, we wanted our great collectors to be part of the 65th Topps Baseball set, and they made their mark by picking one of the best players in baseball today.”

The image on Trout’s Topps card depicts an amazing highlight from the 2015 season. On Sept. 26, he scaled the outfield wall, extended his body over it and robbed Seattle’s Jesus Montero of a home run in a tremendous catch.

Trout is included on a long list of great players who have been represented on the first Topps card of the year, including Jackie Robinson, Willie Mays and Derek Jeter.

Jerry Milani is a freelance writer and public relations executive living in Bloomfield, N.J. He has worked in P.R. for more than 30 years in college and conference sports media relations, two agencies and for the International Fight League, a team-based mixed martial arts league, and now is the PR manager for FAN EXPO, which runs pop culture and celebrity conventions across North America. Milani is also the play-by-play announcer for Caldwell University football and basketball broadcasts. He is a proud graduate of Fordham University and when not attending a Yankees, Rams or Cougars game can be reached at Jerry (at) JerryMilani (dot) com.
@gbpackjerry
Previous DGital Media, Yahoo Sports Launch Groundbreaking “The Vertical Podcast With J.J. Redick”
Next Severino Rookie Card Part Of Topps Series 1 For 2016