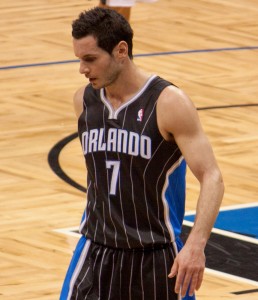 DGital Media, the fast growing creator of high quality audio entertainment in sports, entertainment, business and politics, along with partner Yahoo Sports today announced that they will launch “The Vertical Podcast with JJ Redick,” a new audio offering featuring current Los Angeles Clippers guard J.J. Redick. The podcast,  part of “The Vertical Podcast with Woj,” an on-demand audio series with renowned Yahoo Sports NBA reporter Adrian Wojnarowski, will publish new episodes each Tuesday, along with regular breaking news reports throughout the year. Redick will be the first active NBA athlete to host a regular podcast, with a lineup of guests that will bring fans of all sports closer to the weekly goings-on in the NBA than ever before. Consumers can find the podcast on iTunes, Stitcher and the TuneIn audio platform. Here is a link to the first episode:

“Fans are always clamoring for unique content, we don’t think there can be more of a unique offering than a weekly look into the goings-on of an NBA season through the eyes and words of one of its more seasoned veterans, the LA Clippers J.J. Redick ,” said Chris Corcoran, Chief Content Officer, DGital Media, “’The Vertical Podcast with JJ Redick won’t just be about basketball; it will give fans a great listen into the storytelling narrative of an elite athlete living and playing in Los Angeles, whose background appeals to such a wide audience.”

“I am a big consumer of audio content, and think that this will give fans a deeper dive into the lifestyle and the personalities not just of the NBA, but of other athletes, entertainers and business leaders who have had an influence on my life and career,” Redick said. “There will be something here for everyone, and I’m looking forward to getting into the project.”

Redick, a 10 year NBA veteran in his third season with the Clippers is in the midst of his best statistical season to date. He is averaging 16.6 ppg for Doc Rivers team, after averaging a career best 16.5 ppg last season. Known for his long range scoring and free throw accuracy, the well-spoken  Tennessee native is the All-Time leading scorer at Duke University and is one of the key reasons the Clippers are once again one of the elite clubs in the NBA as the season heads toward the All-Star break. He was the 11th overall pick by the Orlando Magic in the 2006 NBA Draft, and spent seven seasons in Orlando before moving on to the Milwaukee Bucks, and then Los Angeles, where he has emerged as a veteran leader on and off the court.

The launch of “The Vertical With J.J. Redick“ follows the launch of  “Ochocinco and Dukes” earlier this month and last month’s “The Vertical Podcast with Woj.”  Additional announcements of new DGital media partners and talent will be coming in the next few weeks as well.

Jerry Milani is a freelance writer and public relations executive living in Bloomfield, N.J. He has worked in P.R. for more than 30 years in college and conference sports media relations, two agencies and for the International Fight League, a team-based mixed martial arts league, and now is the PR manager for FAN EXPO, which runs pop culture and celebrity conventions across North America. Milani is also the play-by-play announcer for Caldwell University football and basketball broadcasts. He is a proud graduate of Fordham University and when not attending a Yankees, Rams or Cougars game can be reached at Jerry (at) JerryMilani (dot) com.
@gbpackjerry
Previous Hank Haney Signs Multi-Year Deal, Expands to Daily Show Exclusively on SiriusXM PGA TOUR Radio
Next Angels’ Mike Trout voted onto Card No. 1 for 2016 Topps® Baseball