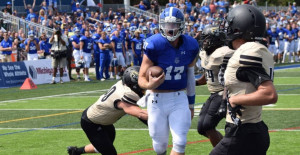 Lawrence Tech Athletics (Southfield, Mich.) is now available to watch every week on Fox Sports Detroit with the “LTU Sports Report” at 4:30 p.m. Mondays. The weekly half-hour highlight show will feature 22 episodes from Monday, Sept. 3 through April. Due to Labor Day, the first episode will air at 11 p.m. on Sept. 3.

Created and produced by Yellow Flag Productions, the “LTU Sports Report” will delve into highlights of the NAIA school’s 26 athletic teams and the lives of its student-athletes and coaches. The “LTU Sports Report” will reach more than three million households statewide, making it the only non-Division 1 college with a state-wide audience. All LTU home games will be streamed on LTUAthletics.com, YouTube, and Facebook.

“The opportunity to bring LTU Athletics to a statewide audience with Fox Sports Detroit was about highlighting one of the top technological schools in the entire country,” Yellow Flag Productions president Lou Bitonti said. “Adding the ‘LTU Sports Report’ to our lineup of original shows is also exciting step in broadening our reach in Michigan and the rest of the Midwest.”

This athletic season marks an historic period for Blue Devil athletics with the return of the school’s football program for the first time since 1946. Lawrence Tech’s Athletic Department is in an era of exponential growth since fielding just four Varsity teams in 2011.

“The ‘LTU Sports Report’ is awesome exposure for the university and our athletic teams to be on Fox Sports Detroit,” LTU Athletics Director Scott Trudeau said. “It’s a step in the right direction, and will be crucial on the recruiting trail as well. I couldn’t have imagined it five or six years ago that we would finally be hitting some of the TV market with our athletics.”

Jerry Milani is a freelance writer and public relations executive living in Bloomfield, N.J. He has worked in P.R. for more than 30 years in college and conference sports media relations, two agencies and for the International Fight League, a team-based mixed martial arts league, and now is the PR manager for FAN EXPO, which runs pop culture and celebrity conventions across North America. Milani is also the play-by-play announcer for Caldwell University football and basketball broadcasts. He is a proud graduate of Fordham University and when not attending a Yankees, Rams or Cougars game can be reached at Jerry (at) JerryMilani (dot) com.
@gbpackjerry
Previous From the Oval Office to the Diamond, Smith Book Tracks the Presidents and Baseball
Next La Vida Baseball Celebrates Hispanic Heritage Month Amidst Record Growth