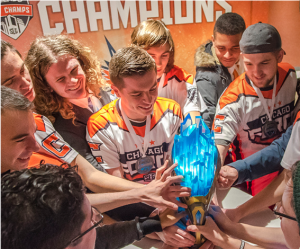 “eSports is exploding in popularity around the world, but the current landscape is lacking an open, easy access point for aspiring gamers and enthusiasts to connect and participate,” said Ann Hand, CEO of Super League Gaming said in a statement. “With our online and live in-person events, we’re leading the way in bringing gamers into esports in a safe, fun and socially rewarding way. Our city-based clubs add a sense of belonging and fandom currently missing from eSports.”

Founded in 2014 with its initial offering of Minecraft events in movie theaters for kids, Super League has now hosted more than 30,000 kids in friendly competition over six seasons of play. In November of 2016, Super League expanded its offering by introducing the world’s most played video game, League of Legends, to its competitive events series in partnership with Riot Games. There has been one season of League of Legends intercity tournament play, with the second season launching online in July in 12 markets across the United States.

“We are excited to enter the world of esports through our relationship with Super League, which has a loyal and growing fan base of kids,” said Matthew Evans, Executive Vice President of Digital and New Business, Nickelodeon. “Nickelodeon is interested in esports because gaming is an important passion point for kids today, and forging this partnership with Super League puts us at the forefront of where kids will be playing next.”

Super League pioneered the way for accessible esports competitions by introducing City Rec and City Champs, establishing the structure and model for amateur esports rooted in one’s locality. These city-focused teams mirror the benefits of traditional sports teams and bring gamers together in a way never before possible. The Chicago Force will be defending the title for the second season of League of Legends City Champs, while the reigning Minecraft City Champs are the LA Shockwaves.

“In my career in professional sports, the most exciting thing is the energy and enthusiasm that fans show for their city’s teams,” said Jeff Vinik, owner of the Tampa Bay Lightning. “Go to any Super League event, and you will see the same energy of players and fans cheering for their city’s team that we see in the NHL.”

Jerry Milani is a freelance writer and public relations executive living in Bloomfield, N.J. He has worked in P.R. for more than 30 years in college and conference sports media relations, two agencies and for the International Fight League, a team-based mixed martial arts league, and now is the PR manager for FAN EXPO, which runs pop culture and celebrity conventions across North America. Milani is also the play-by-play announcer for Caldwell University football and basketball broadcasts. He is a proud graduate of Fordham University and when not attending a Yankees, Rams or Cougars game can be reached at Jerry (at) JerryMilani (dot) com.
@gbpackjerry
Previous Alaska Airlines introduces Seattle Mariners-themed plane to commemorate the club’s 40th anniversary
Next MLB Network heads to Miami for all-access coverage of 2017 All-Star week