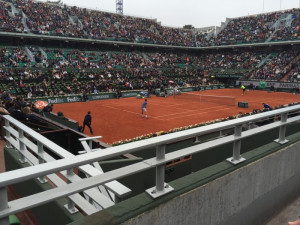 American tennis and red clay have not been the best of matchups over the years—A Williams sister here, a Roddick there, even a random Capriati—but overall U.S. success has been on hard surfaces and grass. Maybe that can finally start to change via a new business- supported partnership at the grassroots level between the USTA and the French Tennis Federation.

“Rendez-vous à Roland-Garros in partnership with Longines,” a U.S.-only junior tennis invitational, will provide for the first time a chance for a wild card entry to the French Open Junior Tournament for American juniors it was announced Wednesday. The event will be held from April 19–22 at the Boca West Country Club in Boca Raton, Florida, with newly laid red clay courts to simulate the Roland-Garros atmosphere. Some of the top U-18 American players (boys and girls) will compete for a chance to enter the Roland-Garros Junior draw in Paris in May 2017.

“We are very pleased to bring Rendez-vous à Roland-Garros to the United States and strengthen the relationship between our nations and among the exceptional youth athletes,” said Bernard Giudicelli, President of FFT in a release. “Roland-Garros fosters a spirit of international competition and respect that will continue to grow with the next generation of tennis champions through this unique program.”

“We see this as a collaboration that is beneficial for everyone,” added USTA President Katrina Adams. “Not only is this a valuable opportunity for some of our American juniors to get experience playing on red clay, it’s a unique way to promote the sport of tennis ahead of the French Open with what figures to be an exciting competition for both players and fans.”

As part of the inaugural event, the iconic Trophies from the French Open, the Coupe des Mousquetaires and the Coupe Suzanne Lenglen, will travel to South Florida, allowing fans the opportunity to pose for photos with the Trophies at multiple locations in Miami and Boca Raton during the tournament. Longines corporate marketing support makes it all happen.

Now of course this is just one step in an ongoing process that has already begun with the new USTA facility in Florida. However steps need opportunity, and this event can provide just that for a young American who may not have had the chance to go to Paris. A step on red clay in the right direction.

Jerry Milani is a freelance writer and public relations executive living in Bloomfield, N.J. He has worked in P.R. for more than 30 years in college and conference sports media relations, two agencies and for the International Fight League, a team-based mixed martial arts league, and now is the PR manager for FAN EXPO, which runs pop culture and celebrity conventions across North America. Milani is also the play-by-play announcer for Caldwell University football and basketball broadcasts. He is a proud graduate of Fordham University and when not attending a Yankees, Rams or Cougars game can be reached at Jerry (at) JerryMilani (dot) com.
@gbpackjerry
Previous Equestrian Lifestyle Channel Set To Make Debut In Canada
Next 15 Seconds of Fame Announces Multi-Year Partnership with MLBAM to Deliver Personal Video Highlights to Fans