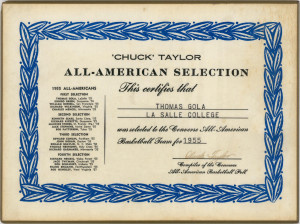 A treasure-trove of rare memorabilia from the collection of LaSalle University and Philadelphia Warriors/New York Knicks legend Tom Gola are on the Goldin Auctions block in the Holiday Auction which is underway and continues through December 12thand 13th.

The Tom Gola Collection is highlighted by his 1986 NBA All Star Ring (presented to him as a former player; Gola was a five-time All-Star) and a pair of Game-Worn jerseys, one a 1959 Warriors road jersey #15, and the second a New York Knicks #6 signed jersey from the from the early 1960’s.

Jerry Milani is a freelance writer and public relations executive living in Bloomfield, N.J. He has worked in P.R. for more than 30 years in college and conference sports media relations, two agencies and for the International Fight League, a team-based mixed martial arts league, and now is the PR manager for FAN EXPO, which runs pop culture and celebrity conventions across North America. Milani is also the play-by-play announcer for Caldwell University football and basketball broadcasts. He is a proud graduate of Fordham University and when not attending a Yankees, Rams or Cougars game can be reached at Jerry (at) JerryMilani (dot) com.
@gbpackjerry
Previous Athletes First and EVERFI Unite to Launch Nationwide Interactive African American History Education Program
Next The American Cornhole League and CBS Sports Agree to Multi-Year Television Partnership