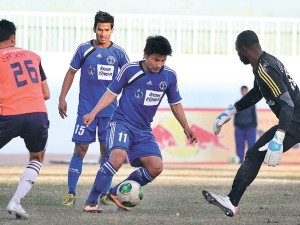 The journeys of mycujoo, which in 2015, in its words, embarked on its journey to transform and disrupt football broadcasting forever by creating a unique digital value proposal to all stakeholders of football – federations, leagues, clubs, players and fans at all levels of the game,” and the country of Nepal, which lost its “A” Division football league, connect in a four-year agreement in which All-Nepal Football Association (ANFA) competitions can be seen on the mycujoo platform.

According to mycujoo’s announcement this week, the agreement encompasses all ANFA sanctioned/organized competitions, as well as any competitions organized by FIFA, AFC or SAFF in Nepal. This will include the 91 matches of this season’s newly launched Martyr’s Memorial ‘A’ Division League, as well as Women’s leagues, Futsal leagues and other competitions.

“mycujoo is strengthening its footprint in Asia with this new agreement with ANFA,” said Pedro Presa, CEO of mycujoo, in a statement. “After our initial partnership with the AFC, we have now 38 multi-year agreements with national associations across Asia. We are by far the single most important factor in the digitalization of football, in Asia and worldwide.”

Jerry Milani is a freelance writer and public relations executive living in Bloomfield, N.J. He has worked in P.R. for more than 30 years in college and conference sports media relations, two agencies and for the International Fight League, a team-based mixed martial arts league, and now is the PR manager for FAN EXPO, which runs pop culture and celebrity conventions across North America. Milani is also the play-by-play announcer for Caldwell University football and basketball broadcasts. He is a proud graduate of Fordham University and when not attending a Yankees, Rams or Cougars game can be reached at Jerry (at) JerryMilani (dot) com.
@gbpackjerry
Previous ‘Creed II’ Trailer Is Out In Advance Of Nov. 21 Release
Next Ryder Cup Odds Favor Team USA, Johnson, Thomas, Rose