With the 150th anniversary of college football arriving in 2019, ESPN is embarking on a year-long, multi-platform storytelling experience that was initially announced in August 2017. As part of the initiative, two weekly documentary series will be launched, with both capturing the pageantry and passion of a sport that is an American institution.

This 11-episode documentary series will focus on college football’s extraordinary narrative by exploring themes that have made the sport an integral component of the American landscape. Among the topics to be examined:

Collectively, The American Game will be a definitive look at the history of college football as not just a sport, but as a cultural phenomenon as well. 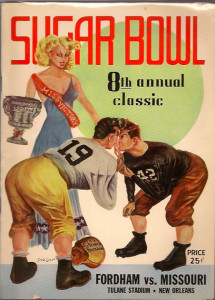 The Greatest – Thursdays, Beginning September 19, 2019
Ranking the all-time best uniforms, rivalry games, voices, and “What Ifs?” among other subjects, this 11-episode series will feature a wide range of Top 11 lists (it is football, after all) spanning the history of the sport. However, The Greatest is about more than rankings, with each episode’s countdown serving as the foundation for storytelling focused on the memories, breakthroughs, and personalities that have defined college football’s remarkable history. Making the choices for each list is an 11-member ESPN jury, who will debate and discuss the candidates before revealing their verdict.

“The history of college football is ripe for this kind of deeper dive into the topics and stories that make it so compelling,” says ESPN Vice President & Executive Producer John Dahl, who is overseeing College Football 150. “By exploring it on and off the field through various themes, we have the opportunity to entertain and enlighten fans with fresh and engaging content week after week.”

The American Game and The Greatest are both being produced by Herzog & Company, the Emmy Award-winning production company which has produced critically acclaimed original programming for network, cable and digital outlets. Recognized most recently for their Emmy-nominated Decades series for CNN (The Sixties, Seventies, Eighties, Nineties and 2000s) and The History of Comedy, Herzog is currently in production on The Movies, a 12-hour documentary series for CNN produced in partnership with Gary Goetzman and Tom Hanks (Playtone), Cola Wars, a 2-hour documentary exploring the historic rivalry between Coke and Pepsi for History Channel, and the true crime documentary special Dirty John: The Dirty Truth for Oxygen which is based on the explosive L.A. Times podcast and newspaper articles. Mark Herzog is also an Executive Producer on the 8-hour scripted series Dirty John that premieres November 25 on Bravo.

“We’re thrilled to be working with ESPN on The American Game and The Greatest,” says Herzog, who is also an Executive Producer on these series. “There’s nothing like the devotion and spirit of college football fans and our hope is that we can give everyone a complete understanding of the phenomenon that college football has become.”

This is the first in a series of announcements about specific plans for the ESPN College Football 150 initiative, which will begin on January 2, 2019 primarily on ESPN’s digital and social platforms.

Jerry Milani is a freelance writer and public relations executive living in Bloomfield, N.J. He has worked in P.R. for more than 30 years in college and conference sports media relations, two agencies and for the International Fight League, a team-based mixed martial arts league, and now is the PR manager for FAN EXPO, which runs pop culture and celebrity conventions across North America. Milani is also the play-by-play announcer for Caldwell University football and basketball broadcasts. He is a proud graduate of Fordham University and when not attending a Yankees, Rams or Cougars game can be reached at Jerry (at) JerryMilani (dot) com.
@gbpackjerry
Previous ‘NBA Wives Club’ Former Member Pens Inspirational Book
Next beIN SPORTS To Air Fall El Clásico Match In 4K HDR