Home / News / Super Fan Tyler Trent’s Legacy Will Outlive Him in His Book, ‘The Upset’

Super Fan Tyler Trent’s Legacy Will Outlive Him in His Book, ‘The Upset’

Jerry Milani December 31, 2018 News Comments Off on Super Fan Tyler Trent’s Legacy Will Outlive Him in His Book, ‘The Upset’ 1,442 Views 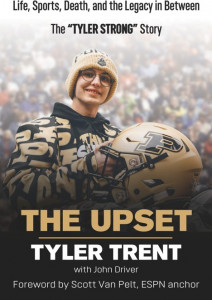 According to the twenty-year-old sports writer, suffering from a rare bone cancer, “Three months ago, doctors gave me three months to live…but, by the grace of God and the generosity of Colts’ owner Jim Irsay, here I am.”

“Here” is Nashville, Tennessee, where Tyler Trent‘s beloved Boilermakers (6-6) faced the favored Auburn Tigers (7-5) in Nissan Stadium on Friday, the first time these football teams have met. Purdue came out on the short end, but Trent served as honorary captain.

This young man is beloved by the Purdue football team and staff, as well as the university and surrounding community. But it was only this past fall that Tyler Trent’s harrowing story rocketed out of Indiana and into the national spotlight when he boldly predicted that Purdue would defeat Ohio State.

On October 19, 2018, an ESPN interviewer asked Tyler about the future, presumably inquiring about his cancer prognosis. But Tyler’s response focused instead on the next day when his Boilermakers would face the seemingly invincible Ohio State Buckeyes.

“The immediate future in my mind? Purdue beats Ohio State.”

The ESPN video of Trent’s story and subsequent prediction went viral, being viewed more than 20 million times on the internet. https://goo.gl/s4fgsW

Though he was virtually alone in making this call, the next day his Boilermakers soundly defeated the Buckeyes, 49-20…and miraculously, he was well enough to experience the historic moment in person, even offering a short post-game speech in the rowdy Purdue locker room after the game.

Tyler had never worn a Purdue jersey or helmet on the field, but he had become a key member of the team.

This game provided the underlying metaphor of Trent’s book, THE UPSET: Life, Sports, Death, and the Legacy in Between. Scheduled to release March, 2019 (Core Media Group, 260 pages, $24.99), the book features a Foreword by Trent’s friend and ESPN anchor, Scott Van Pelt, as well as endorsements from many influencers in the world of sports and media.

Tyler Trent has had this kind of impact.

THE UPSET: Life, Sports, Death, and the Legacy in Between can be pre-ordered online beginning Dec. 28 at www.tylertrentbook.com.

A portion of every purchase on this website will be donated to cancer research in Tyler Trent’s name…and to help families facing cancer.

“Most people never see their legacy come to pass while they are still alive,” Tyler’s dad, Tony Trent, said. “We would love for Tyler to tell his story and reach his goal for cancer research, supporting families who are battling cancer.”

Tyler and his family’s dream is to raise at least one million dollars to help defeat this horrible disease.

Jerry Milani is a freelance writer and public relations executive living in Bloomfield, N.J. He has worked in P.R. for more than 30 years in college and conference sports media relations, two agencies and for the International Fight League, a team-based mixed martial arts league, and now is the PR manager for FAN EXPO, which runs pop culture and celebrity conventions across North America. Milani is also the play-by-play announcer for Caldwell University football and basketball broadcasts. He is a proud graduate of Fordham University and when not attending a Yankees, Rams or Cougars game can be reached at Jerry (at) JerryMilani (dot) com.
@gbpackjerry
Previous UFC® Debuts First-Ever Comic Book: ‘Tales Of UFC’
Next FloSports, D.C. United Reach Multiyear Broadcast Partnership