Home / Uncategorized / The A7FL Kicks Off New Season on FITE

The A7FL Kicks Off New Season on FITE

Jerry Milani April 8, 2021 Uncategorized Comments Off on The A7FL Kicks Off New Season on FITE 758 Views

The American 7s Football League® (A7FL) and FITE today announced that two A7FL Sunday “Games of the Week” will be presented live exclusively by FITE, the premier global digital platform for sports and entertainment, for the fast-growing league’s 2021 season beginning on April 11. Each Sunday during the league’s regular season and national playoffs, FITE will present the A7FL’s pioneering, no-helmets, no-pads, full-contact tackle football on Pay-Per-View with two top matchups along with look-ins from games being played around the country. As an added bonus, FITE is making the first two weeks of the upcoming season completely free.

The 2021 season follows a successful tournament format that took place this past summer which showcased the A7FL as the first football league to resume play during the pandemic. The A7FL’s unique rules retain the toughness and excitement that fans crave while also delivering action-filled games and mind-blowing highlights, bringing the sport to the attention of millions of new fans while also catching the attention of SportsCenter, Snoop Dogg and Deion Sanders. The A7FL piloted its FITE relationship by presenting a classic matchup featuring perennial league powerhouses the PA Immortalz vs the NJ Savage on March 21st, leaving FITE fans impressed and wanting more American 7s content.

“There’s a lot of ways to look at A7FL,” said Michael Weber of FITE. “Some say people like it because it’s how we all grew up playing the game in parks and streets. One thing we found for sure in March is that combat sports fans really like it.”

In addition to its New Jersey and Baltimore teams, the A7FL has now added two new divisions, one in Florida (based in Orlando, the largest US market without an NFL franchise) and the other in Southern California (in and around San Diego), where the season is scheduled to start on April 18th. This increases the league’s current number of divisions to 4 with a total of 20 teams.

“There’s a huge crossover between A7FL and MMA fans,” said David Isaacs, UFC Co-Founder and Chairman of the A7FL’s Advisory Board. “Partnering with FITE enables us to reach these diehards where they already go for fights and wrestling. And now they’ll have the chance to experience what the A7FL is all about.”

For its April 11 opening day matchups, FITE will present two “Games of the Week” starting at 1:30 PM ET with Trenton BIC vs. Baltimore Cobras. The Cobras are led by Derrell “BONE” Harris, one of the league’s most versatile players, who will line up against a stacked BIC squad that features legendary running back Courage Mozie as well as 2-time A7FL MVP Matt Riddick and Ashante Worthy, the A7FL 2020 Rookie of the Year and 2018 New Jersey High School Football Player of the Year.

Jerry Milani is a freelance writer and public relations executive living in Bloomfield, N.J. He has worked in P.R. for more than 30 years in college and conference sports media relations, two agencies and for the International Fight League, a team-based mixed martial arts league, and now is the PR manager for FAN EXPO, which runs pop culture and celebrity conventions across North America. Milani is also the play-by-play announcer for Caldwell University football and basketball broadcasts. He is a proud graduate of Fordham University and when not attending a Yankees, Rams or Cougars game can be reached at Jerry (at) JerryMilani (dot) com.
@gbpackjerry
Previous Golfer DeChambeau Inks with Rocket Mortgage
Next World Soccer Talk Serves as Ultimate Resource for 2021 NWSL Season 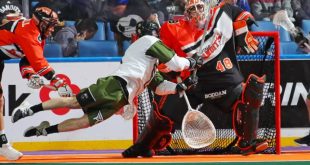