Jerry Milani March 11, 2019 News, On The Air Comments Off on World TeamTennis And CBS Sports Partner On Television Agreement 895 Views 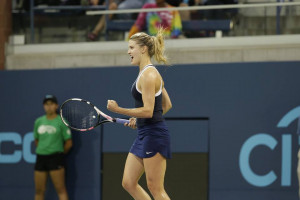 As in years past, the 2019 WTT season will feature current ATP and WTA stars competing for team glory for the league’s eight franchises. Previous WTT competitors include Naomi Osaka, Serena and Venus Williams, Maria Sharapova, John Isner, the Bryan Brothers and Nick Kyrgios, among others.

CBS Sports Network will televise 15 WTT matches throughout the season, starting on Monday, July 15. The network will also air the semifinals and finals from Orleans Arena in Las Vegas on Friday, Aug. 2 and Saturday, Aug. 3 (7:00 PM, ET, both days).

“World TeamTennis is proud to become a broadcast and cable partner with CBS,” said WTT CEO Carlos Silva. “WTT will be on broadcast, cable and online in 2019, and this is just another exciting way we plan to showcase and grow team tennis this summer.”

“CBS Sports is excited to partner with such an iconic property in the world of tennis,” said Dan Weinberg, Executive Vice President of Programming, CBS Sports. “World TeamTennis has a rich history spanning more than 40 years and attracts the best players in the world to play in their events. We look forward to televising this action-packed competition.”

The 2018 WTT season saw an unprecedented digital transition as the league introduced its own live match streaming platform, WTT.tv. Tennis fans from around the world were able to experience the high-energy World TeamTennis format, teaming men and women together on the same court, with live or on-demand access to all 43 matches of the 2018 WTT season, produced by WTT broadcast teams in high definition with expert commentary on WTT.tv’s mobile-optimized website. WTT.tv will broadcast 43 matches live in 2019 and offer the 16 CBS exclusive matches via Video on Demand on a 48-hour delay.

WTT is one of five active U.S. pro sports leagues which has been in operation for over 40 years, along with the NFL, NBA, NHL and MLB. For more information on World TeamTennis, please visit www.wtt.com.

CBS Sports Network, the 24-hour home of CBS Sports, is widely available through all major cable, satellite and telco distributors as well as via OTT streaming service providers YouTube TV, fuboTV, PlayStation Vue, DirecTV and Hulu. Additionally, a live CBS Sports Network stream is available through CBSSports.com and the CBS Sports App by authenticating with select providers. For more information, including a full programming schedule, go to www.cbssportsnetwork.com.

Jerry Milani is a freelance writer and public relations executive living in Bloomfield, N.J. He has worked in P.R. for more than 30 years in college and conference sports media relations, two agencies and for the International Fight League, a team-based mixed martial arts league, and now is the PR manager for FAN EXPO, which runs pop culture and celebrity conventions across North America. Milani is also the play-by-play announcer for Caldwell University football and basketball broadcasts. He is a proud graduate of Fordham University and when not attending a Yankees, Rams or Cougars game can be reached at Jerry (at) JerryMilani (dot) com.
@gbpackjerry
Previous NHL Network to Televise Kazmaier Award Ceremony on March 23
Next The Drone Racing League Launches 2019 Season with Twitter and NBC