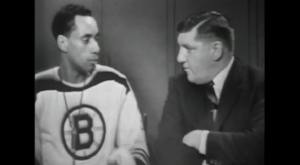 On Monday, April 29, the documentary will make its world premiere at Hot Docs 2019 at the Hot Docs Ted Rogers Cinema, the largest screening venue at the festival. WILLIE tells the incredible story of Willie O’Ree, who in 1958 became the first black man to play in the National Hockey League.

Born in Fredericton, New Brunswick in 1935, O’Ree began his journey as the youngest of 13 children. A multi-sport athlete, his career path originally pointed toward professional baseball. But after  experiencing segregation first-hand during a tryout in the U.S. during the Jim Crow era, he reconsidered his options and returned to hockey.

O’Ree turned to hockey.  Despite being blind in one eye from an injury he suffered in 1956 and kept secret throughout his playing career, he made it to the National Hockey League. On January 18, 1958, O’Ree made his NHL debut, playing for the Boston Bruins against the Montreal Canadiens in the fabled Montreal Forum. He would go on to play two seasons in the NHL and more than 20 seasons of professional hockey.

In association with the National Hockey League, the documentary was directed and produced by award-winning filmmaker, editor, and producer Laurence Mathieu-Leger. It was produced by Bryant McBride, who sought out and hired O’Ree while working for the NHL more than 20 years ago.

Tickets to see WILLIE go on sale on Tuesday, March 26 at 11:00 a.m. ET. Tickets will be available for purchase at  http://www.hotdocs.ca/.  For more details about the documentary, visit  https://www.williedoc.com/

Jerry Milani is a freelance writer and public relations executive living in Bloomfield, N.J. He has worked in P.R. for more than 30 years in college and conference sports media relations, two agencies and for the International Fight League, a team-based mixed martial arts league, and now is the PR manager for FAN EXPO, which runs pop culture and celebrity conventions across North America. Milani is also the play-by-play announcer for Caldwell University football and basketball broadcasts. He is a proud graduate of Fordham University and when not attending a Yankees, Rams or Cougars game can be reached at Jerry (at) JerryMilani (dot) com.
@gbpackjerry
Previous The Drone Racing League Launches 2019 Season with Twitter and NBC
Next Lara Logan, Navy Vice Admiral David Buss To Play In SOF Support/Navy SEALs Benefit Golf