XFL to Air on ABC, ESPN, FOX Sports and FS1

“We look forward to showcasing the XFL on ESPN and ABC, including the kickoff game and championship during the league’s inaugural season,” said Burke Magnus, ESPN Executive Vice President, Programming and Scheduling. “Vince McMahon and Oliver Luck are two of the sports industry’s most creative and experienced leaders, and they have exciting plans for this league. We believe in their vision for the XFL, which will be a great addition to our year-round commitment to football.”

“We welcome the XFL to the FOX Sports Family and are pleased to expand our relationship with Vince McMahon,” said Eric Shanks, FOX Sports CEO & Executive Producer. “Football is in FOX Sports’ DNA and a key component of our programming strategy. Alongside Oliver Luck and his incredible team, we’re excited for the debut of the XFL on FOX Sports.”

“We are thrilled to partner with ESPN and FOX Sports, two innovative media companies with extensive experience in world-class football production that will undoubtedly help us reimagine football,” said Vince McMahon, XFL Founder & Chairman. “The XFL broadcast schedule provides us with incredible reach and makes it easy for fans to watch our games consistently every weekend.”

The agreements were negotiated by CAA Sports and Evolution Media Capital (EMC) on behalf of the XFL.

The XFL will kick off on Saturday, February 8, 2020 with teams in Dallas, Houston, Los Angeles, New York, St. Louis, Seattle, Tampa Bay and Washington D.C. Additional XFL-themed programming and on-air talent will be announced in the future. 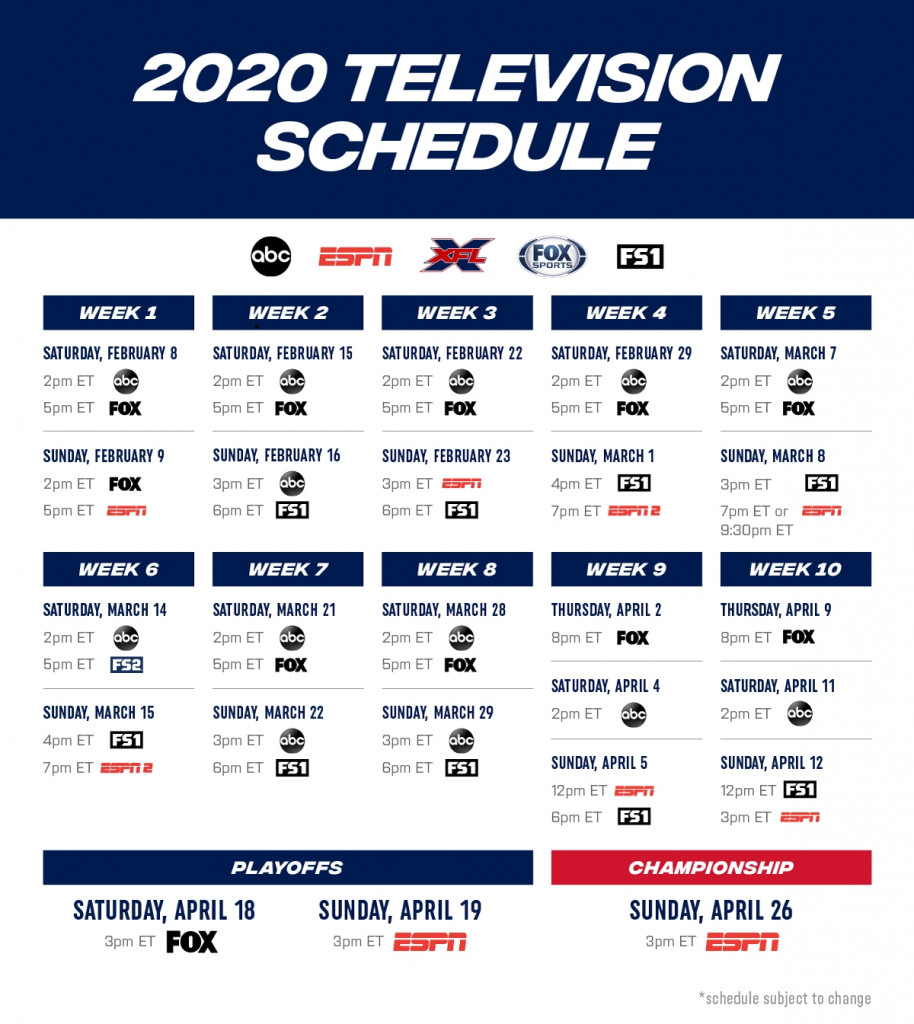 Jerry Milani is a freelance writer and public relations executive living in Bloomfield, N.J. He has worked in P.R. for more than 30 years in college and conference sports media relations, two agencies and for the International Fight League, a team-based mixed martial arts league, and now is the PR manager for FAN EXPO, which runs pop culture and celebrity conventions across North America. Milani is also the play-by-play announcer for Caldwell University football and basketball broadcasts. He is a proud graduate of Fordham University and when not attending a Yankees, Rams or Cougars game can be reached at Jerry (at) JerryMilani (dot) com.
@gbpackjerry
Previous MyCujoo To Stream CBF Serie D Matches From Brazil
Next Azteca America To Provide Exclusive Media Sales For beIN Network