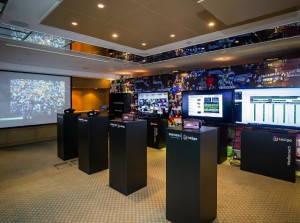 LaLiga, the Spanish football league, presented its transformative technologies of LIVE match broadcasting through an interactive innovation showcase in Hong Kong, coinciding with the RISE 2019 Conference. The showcase was created by LaLiga, together with its production partner Mediapro, a leading group in the European audiovisual sector, and in collaboration with Samsung and Microsoft.

At the event, staged for the second time in Asia, journalists from around the world were shown cutting-edge technologies in football that power LaLiga’s unrivalled broadcast, including artificial intelligence, the technology that makes VAR possible and the evolution of virtual reality. The event was also attended by Joris Evers, Chief Communications Officer of LaLiga, and Minerva Santana, Director of LaLiga Innovation and Global Development.

“At a time when there is much talk about artificial intelligence and machine learning, LaLiga is demonstrating its leadership in football and the sport sector as we start to use these technologies to optimize scheduling of our matches. LaLiga is committed to discovering how the likes of AI and VR can expand viewing experiences of our fans worldwide,” said Joris Evers, LaLiga’s Chief Communications Officer.

Recent years witnessed LaLiga’s commitment to continuing technology innovation and providing the best viewing experience for football fans in China as well as broader Asian markets. India continues to be a primary market for LaLiga as the game continues to grow in a country of over a billion. In December 2017 over 17,000 fans were present in Delhi for an El Clasico public screening, one of the biggest to date for the league. In addition, LaLiga has continued to bring former stars of the Spanish top-flight to the country, the likes of Gaizka Mendieta, Gianluca Zambrotta, Steve McManaman, Fernando Morientes and Robert Pires have all leant their efforts to grow LaLiga’s outreach in the country.

LaLiga Football Schools in India continue to thrive, over 10,000 students on 35 programmes across 14 cities goes to the show the appetite and success thus far. There have been opportunities for the best students across age groups to train with a LaLiga club. LaLiga remains active across CSR and media outreach opportunities.

And it’s a similar story in South East Asia, especially Indonesia where the love for LaLiga is evident. Over 30 media attended a season launch event in Jakarta for the 2018/19 season, and a crowd close to 10,000 for an El Clasico public viewing taking place in the middle of the night! LaLiga remains active across SEA where the regional headquarters are in Singapore, media and commercial outreach going a long way as the league looks to realize its potential in the region.

LaLiga has partnered the likes of Sports Matters, World Football Summit and Sportel just to name a few of the industry events in SEA, and important area to share our knowledge of the football landscape as well as continuing our learnings in the region, also it has been fortunate to work with the likes of Luis Garcia and Fernando Hierro who have travelled to the region supporting LaLiga’s initiatives.

For specific technology introduction, please search for the following keywords:

Jerry Milani is a freelance writer and public relations executive living in Bloomfield, N.J. He has worked in P.R. for more than 30 years in college and conference sports media relations, two agencies and for the International Fight League, a team-based mixed martial arts league, and now is the PR manager for FAN EXPO, which runs pop culture and celebrity conventions across North America. Milani is also the play-by-play announcer for Caldwell University football and basketball broadcasts. He is a proud graduate of Fordham University and when not attending a Yankees, Rams or Cougars game can be reached at Jerry (at) JerryMilani (dot) com.
@gbpackjerry
Previous German Football Partners With Genius Sports To Battle Match-Fixing
Next Kaney To Lead NLL Broadcast For Sept. 17 Draft