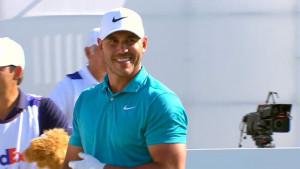 Brooks Koepka has earned his share of hardware over his career, and today the PGA TOUR‘s top-ranked player picked up another as he was officially presented with the inaugural Aon Risk Reward Challenge trophy—and accompanying $1 million prize—in Jersey City, N.J., as he prepares for The Northern Trust event at Liberty National Golf Course beginning Thursday. Koepka scored the best on designated holes at courses throughout the PGA TOUR season, specially selected by the Tour and AON to test the ability of players and their caddies to analyze risk and make strategic decisions.

“It’s been so much fun for us,” said Koepka as he sat in front of the trophy and a gathering of media in The Northern Trust press room. “Everyone is talking about it; even if you’re out of the tournament [contention], there is still something to play for.” 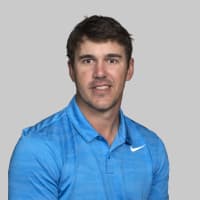 Though a nice bonus (literally!), Koepka didn’t necessarily play the designated hole differently than he would any other, but he was aware that there was a little more on the line each time.

“I just had my game plan for whatever the hole—I thought the best way to play the hole,” he explained. “I knew which hole it was but I wasn’t taking a different strategy just because it was the Aon Risk Reward Challenge. It wasn’t any different than how I wanted to play because I also wanted to win the golf tournament, too.”

Koepka also noted that he and his fellow pros would learn which hole would be designated at a particular event during the practice rounds, and the one that was selected was usually not a surprise. 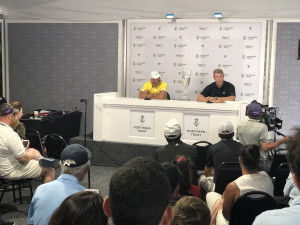 “You pretty much know which hole it’s going to be for every golf course,” he noted. “You can tell. There’s definitely a lot of risk/reward.”

The program is also being contested on the LPGA tour where its top finisher will receive an equal $1 million reward at the LPGA’s season finale, the CME Group Tour Championship, in November.

Jerry Milani is a freelance writer and public relations executive living in Bloomfield, N.J. He has worked in P.R. for more than 30 years in college and conference sports media relations, two agencies and for the International Fight League, a team-based mixed martial arts league, and now is the PR manager for FAN EXPO, which runs pop culture and celebrity conventions across North America. Milani is also the play-by-play announcer for Caldwell University football and basketball broadcasts. He is a proud graduate of Fordham University and when not attending a Yankees, Rams or Cougars game can be reached at Jerry (at) JerryMilani (dot) com.
@gbpackjerry
Previous CBS To Air WTT Finals, Highlight Show Saturday
Next Hawk, Comaneci, Howard Featured As Laureus USA Announces 2019 Fashion Show Gala