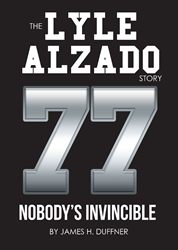 The Lyle Alzado Story: Nobody’s Invincible: an incredible and in-depth look into the life of one man that most men feared, very few knew, and many questioned. The unknown side of the football star that had a very difficult childhood and turned that pain and torment into a successful and rewarding life, even with the added controversy. The Lyle Alzado Story: Nobody’s Invincible is the creation of published author James H. Duffner, a writer-athlete who has excelled at the game of football since he was a teenager, and has played in high school, college, and professionally. Since his retirement from professional football several years ago, he has made a living as an actor, stuntman, technical advisor, and producer.

Duffner writes, “Football legend Lyle Alzado was one of the most intimidating football players of all time. He was an animal on the field—a one-man wrecking crew. Due to his sheer viciousness on the gridiron, he is the only player to have an NFL rule named after him; one meant to prevent injury and to possibly save lives. Off the field, however, he was a picture of contradictions. Prone to rages and abrupt acts of violence, he was also known for his compassionate work with mentally and physically challenged children. The man who feared nobody was, in reality, riddled with a deep-seated terror that any kind of failure would send him back to the ghetto streets he grew up on.

Living with a violent, selfish father left him desperate for love, which he often looked for in all the wrong places. Having been teased and ridiculed mercilessly in school left him with a deep-seated need for acceptance, leaving him emotionally vulnerable. He was hysterically funny and menacingly frightening; astoundingly powerful and surprisingly gentle; seemingly invincible and ultimately very, very fragile.”

Published by Christian Faith Publishing, Duffner’s new book invites the reader into Lyle’s inner circle, to rub shoulders with both sports greats and Hollywood superstars, to get to know him better than almost everyone except his closest friends.

Jerry Milani is a freelance writer and public relations executive living in Bloomfield, N.J. He has worked in P.R. for more than 30 years in college and conference sports media relations, two agencies and for the International Fight League, a team-based mixed martial arts league, and now is the PR manager for FAN EXPO, which runs pop culture and celebrity conventions across North America. Milani is also the play-by-play announcer for Caldwell University football and basketball broadcasts. He is a proud graduate of Fordham University and when not attending a Yankees, Rams or Cougars game can be reached at Jerry (at) JerryMilani (dot) com.
@gbpackjerry
Previous Red Penguins Debuts At Toronto Festival
Next SiriusXM Celebrates NFL’s 100th Season with New 20-Part Podcast Series