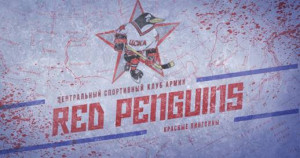 Gabe Polsky, whose Red Army documentary gave viewers a look inside the Soviet Union’s vaunted Red Army hockey team (you know, the one that rolled through the world before being beaten at the 1980 Lake Placid Olympics by Mike Eruzione and Team U.S.A), returns with Red Penguins, debuting at TIFF.

Complete with gangsters, strippers, and live bears serving beer on a hockey rink, RED PENGUINS tells the wild forgotten true story of capitalism and opportunism run amok in Moscow. Shortly after the collapse of the Soviet Union, the Pittsburgh Penguins and the famed Red Army hockey team formed a joint venture that redefined what was possible in the new Russia. Eccentric marketing whiz, Steve Warshaw, is sent to Moscow and tasked to transform the team into the greatest show in Russia, attracting some of the biggest names in Hollywood and advertising along the way. He takes the viewer on a bizarre journey highlighting a pivotal moment in U.S.-Russian relations during a lawless era when oligarchs made their fortunes and multiple murders went unsolved.

Check this space for a review, coming soon!

Jerry Milani is a freelance writer and public relations executive living in Bloomfield, N.J. He has worked in P.R. for more than 30 years in college and conference sports media relations, two agencies and for the International Fight League, a team-based mixed martial arts league, and now is the PR manager for FAN EXPO, which runs pop culture and celebrity conventions across North America. Milani is also the play-by-play announcer for Caldwell University football and basketball broadcasts. He is a proud graduate of Fordham University and when not attending a Yankees, Rams or Cougars game can be reached at Jerry (at) JerryMilani (dot) com.
@gbpackjerry
Previous Yankee Global Enterprises with Strategic Partners Acquire YES Network from Disney
Next James Duffner’s ‘The Lyle Alzado Story: Nobody’s Invincible’ Released