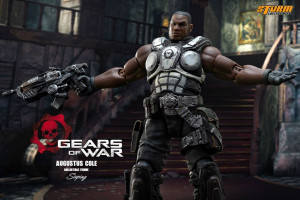 TV Azteca, S.A.B. de C.V., one of the two largest producers of Spanish-language television programming in the world, and its exclusive global esports programming partner, Allied Esports, today announced that Azteca Esports will broadcast the Gears 5 Pro League in Latin America through a new alliance with Gears Esports.

Gears Esports announced the Gears 5 Esports Program and Pro League earlier in 2019, creating opportunities for Gears of War fans from around the world to participate in global competition. The Gears 5 Pro League 2019-2020 schedule, which includes North America Alpha, North America Bravo, Latin America and Europe divisions, will conclude in July 2020 with the first Gears 5 World Championship.

“Mexico’s incredible passion for the Gears franchise has resulted in fans expressing their love of Gears through everything from Gears Ink tattoos to themed weddings. This enthusiasm extends to the games themselves, as the player base in Mexico produces some of the highest activity for Gears titles and features more players playing Gears of War 4 at the highest professional skill levels than anywhere else. For this season of Gears Esports, we felt it was important to partner with the team at Azteca Esports to reach this passionate community in an authentic way,” said Rose Gunson, Esports Creative Program Manager for Gears Esports at The Coalition.

The announcement continues TV Azteca and Allied Esports’ strategic alliance to create and produce esports events and content via Azteca Esports that will reach a growing gaming audience and set the foundation for the development of Mexico’s first 24-hour digital channel dedicated to esports and video game culture.

“Creating electrifying programming with industry partners like Gears Esports will be the foundation and backbone of our future network, powered by Allied Esports’ unmatched innovation and expertise and TV Azteca’s vast reach,” said David Moon, Chief Operations Officer at Allied Esports Entertainment, the parent company of Allied Esports. “On the heels of multiple successful events and broadcasts this summer that were watched by millions, we are excited to bring the Gears 5 Pro League to an audience that has shown a hunger for great esports content.”

Azteca Esports has already produced several successful original esports events in Mexico in 2019, including Nation VS Nation in May 2019, which featured 40 competitors in a USA vs. Mexico format playing PlayerUnknown’s Battlegrounds. The event was Allied Esports’ first event and broadcast production in Latin America and reached over two million viewers across TV Azteca’s broadcast channels.

According to Rodolfo Ramírez, head of Azteca Deportes: “We anticipate that this alliance will be a cornerstone for TV Azteca´s esports strategy and that the Gears Pro League will be an integral part of our 24-hour digital channel. Our goal is to always pursue the best content possible for the Mexican audience and to be considered a top platform to consume esports in the region.”

The companies also intend to work together to develop and build a network of esports talent with expertise across all game genres and titles and with experience in additional forms of entertainment.

Jerry Milani is a freelance writer and public relations executive living in Bloomfield, N.J. He has worked in P.R. for more than 30 years in college and conference sports media relations, two agencies and for the International Fight League, a team-based mixed martial arts league, and now is the PR manager for FAN EXPO, which runs pop culture and celebrity conventions across North America. Milani is also the play-by-play announcer for Caldwell University football and basketball broadcasts. He is a proud graduate of Fordham University and when not attending a Yankees, Rams or Cougars game can be reached at Jerry (at) JerryMilani (dot) com.
@gbpackjerry
Previous UFA to Broadcast CWS Fight Night from Germany
Next National Lacrosse League and Under Armour/Team 22 Renew Partnership