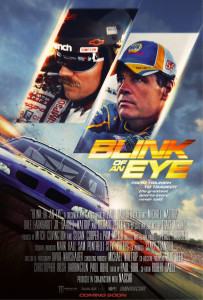 Following a successful nation-wide theatrical run in the United States and rave reviews from critics, the new feature sports documentary Blink of an Eye is now available on all major digital download and rental platforms worldwide.

Brought to the big screen by multiple Emmy Award-winning filmmaker TAUBLIEB Films, the NASCAR documentary with an appealing story far beyond the world of motor sports now races into living rooms in digital rental and download format.

Fans can sit back and enjoy the emotional ride from triumph to tragedy on platforms such as iTunes, Amazon, Google Play, Vimeo on Demand, Vudu, Comcast Xfinity, Time Warner VOD, Dish VOD, FandangoNOW, and more.

Based on the New York Times-bestselling autobiography of the same name, Blink of an Eye captures the greatest sports story never told in HD-format: The journey of professional stock car racing driver Michael Waltrip to a complex victory and his star-crossed friendship with NASCAR legend Dale Earnhardt come to life through interviews and archival footage in director Paul Taublieb’s emotionally engaging storytelling style.

“People are obviously capable of handling the highest of highs and the lowest of lows… But I don’t know how many people have had to experience them within seconds of each other,” says Michael Waltrip in a pivotal scene in Blink of an Eye.

The film’s profound emotional impact resonated with audiences during a nation-wide cinematic run in early September, followed by an encore at select cinemas in NASCAR hotbeds across the South. Film critics also attest to the universal message behind the true story. Jim Amos at Forbes magazine wrote: “One of the strengths of this movie, and there are many, is its broad appeal that expands well beyond sports and NASCAR fans, and its relatability no matter the viewer’s age, social status, or political belief. [. . .] Blink of an Eye is a gripping fable about determination, heartbreak, fortitude, and never losing belief in oneself.”

As a special treat for fans at home, the digital edition on Apple iTunes features exclusive iTunes Extras such as deleted scenes, a rare 1990 interview with racer Dale Earnhardt, and the music video for the movie’s original theme song ‘In the Blink of an Eye’.

Speaking of the theme song, the epic ballad is performed by Bobby Capps of the legendary rock band 38 Special, as well as members of 3 Doors Down: Chris Henderson, Greg Upchurch, and Chet Roberts. The songwriter is no other than Mitch Covington, Monster Energy’s VP of Sports Marketing, who discovered Blink of an Eye through the New York Times best-selling book of the same name and brought Taublieb on board as the director.

“When I heard the entire story of this odd couple but deep friendship and sacrifice between the great Dale Earnhardt and fun-loving Michael Waltrip, I was reduced to tears,” explains Mitch Covington. “I knew right away that the perfect person to make this into a feature documentary would be Paul Taublieb, who I recognize as one of the most creative documentary filmmakers working today.”

Produced and Directed by TAUBLIEB Films, with support from Monster Energy, and in association with NASCAR, and distribution by 1091 Media (formerly The Orchard), the cinematic documentary chronicles former professional stock car racer Michael Waltrip and his tragic, star-crossed friendship with the late NASCAR legend, Dale Earnhardt Sr. The film is inspired by Waltrip and Ellis Henican’s 2011 New York Times best-selling book, In the Blink of an Eye: Dale, Daytona, and the Day that Changed Everything (Machete Books).

Multi Emmy-winning action and motorsports filmmaker Taublieb brought the story to the big screen with his signature style of penetrating interviews that are interwoven with blistering energy. Taublieb created the film together with his wife, multiple Emmy Award-winning producer and director Susan Cooper, who is a founding partner of TAUBLIEB Films.

“Great stories are a gift, and this one has all the elements,” said the film’s director and producer Paul Taublieb. “Triumph, tragedy, the unexpected, and amazing characters. It’s a story that transcends sports, much like Free Solo (2018) or The Endless Summer (1966), bringing a human quality that anyone can relate and be engaged to, whether you are a sports fan or not. My film resonates with themes of perseverance, grit, determination and above all, the redemptive and transformation of friendship, even in tragedy.”

Tags blink of an eye nascar

Jerry Milani is a freelance writer and public relations executive living in Bloomfield, N.J. He has worked in P.R. for more than 30 years in college and conference sports media relations, two agencies and for the International Fight League, a team-based mixed martial arts league, and now is the PR manager for FAN EXPO, which runs pop culture and celebrity conventions across North America. Milani is also the play-by-play announcer for Caldwell University football and basketball broadcasts. He is a proud graduate of Fordham University and when not attending a Yankees, Rams or Cougars game can be reached at Jerry (at) JerryMilani (dot) com.
@gbpackjerry
Previous Mike Krzyzewski Inks Multi-Year Extension with SiriusXM
Next Sportlogiq becomes the Official Statistics Partner of the National Lacrosse League