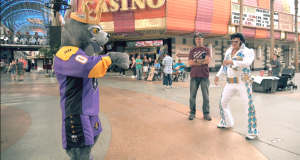 The San Diego Seals announced today that the team will play host to the Colorado Mammoth at Orleans Arena in Las Vegas on Saturday, February 1, 2020 marking the first game in National Lacrosse League history to be played in Las Vegas, on what is traditionally the biggest sports weekend of the year in the city.

The majority of Seals’ season ticket members will receive free hotel rooms in the desert oasis for the weekend of the team’s big game – and for that Sunday’s big game, a unique first time promotion for season subscribers in any sport.

“For 33 years, the National Lacrosse League has brought energy and excitement to millions of fans across North America. We are thrilled to collaborate with the San Diego Seals to create this incredible opportunity for their fans as well as the Colorado Mammoth fans to experience a unique and spectacular event,” said NLL Commissioner Nick Sakiewicz. “As we continue to expand our amazing product to fans across North America and around the world, we are always looking to our future, and are excited to be working with Seals owner Joe Tsai, Steve Govett, the Orleans Arena and all our partners to create this unique event in Las Vegas on the City’s biggest weekend of the year.”

“We’re honored to represent the National Lacrosse League for the first-ever game in Las Vegas, and to bring the Seals faithful on the road with us by providing complimentary hotels to many of our fans,” said Seals President Steve Govett. “The additional benefit of showcasing professional box lacrosse to a new audience is exciting. The atmosphere at Orleans Arena is going to be electric, and we look forward to exposing the sport to a brand-new fan base in an iconic city.”

A destination game in Las Vegas marks a monumental moment in National Lacrosse League history and provides fans with a unique and exciting opportunity to witness the best lacrosse players in the world.

The NLL, the largest and most premier professional lacrosse league, continues its growth as the 2019-20 season starts, ranking third in average attendance for pro indoor sports, with 13 teams in key markets across North America. The NLL overall experienced substantial growth last season with nearly one million total ticket sales, a 28-percent increase from 2017-18, and 60 percent of ticket sales were from people who never played lacrosse, which fits seamlessly into the marketing of this first-ever game in the world’s destination city.

Seals season ticket members get tickets to the game. Details can be found at SealsLax.com.

Jerry Milani is a freelance writer and public relations executive living in Bloomfield, N.J. He has worked in P.R. for more than 30 years in college and conference sports media relations, two agencies and for the International Fight League, a team-based mixed martial arts league, and now is the PR manager for FAN EXPO, which runs pop culture and celebrity conventions across North America. Milani is also the play-by-play announcer for Caldwell University football and basketball broadcasts. He is a proud graduate of Fordham University and when not attending a Yankees, Rams or Cougars game can be reached at Jerry (at) JerryMilani (dot) com.
@gbpackjerry
Previous ‘World’s Fastest Gamer’ Launches YouTube Series On Lets Go Racing Channel
Next Ticketbud Partners with the American Basketball Association