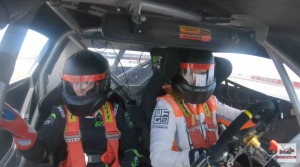 World’s Fastest Gamer took ten of the greatest esports racers from around the world to the US for a 12-day non-stop motorsport tour.

From Las Vegas to Los Angeles; up the California coast to San Francisco and back to Vegas – the 10 gamers were tested in game and on track to find the best of the best.

While Las Vegas is renowned for its famous saying “what happens in Vegas, stays in Vegas” – that won’t be the case for World’s Fastest Gamer.

In addition to a six-part documentary series headed to TV screens in 2020, the race to earn a real-world, full-time race seat won by British gamer James Baldwin will be showcased online on YouTube on Lets Go Racing in “Behind the Scenes of WFG.”

“World’s Fastest Gamer content on Lets Go Racing has already attracted more than two million views and we’re looking forward to using their amazing platform to take fans behind the scenes and showcase the amazing experience these gamers went through,” Cox said.

“The experiences the 10 finalists went through will live for them for a very long time. From driving supercars in Vegas to racing through ‘The Corkscrew’ at Laguna Seca and even driving an 800 horsepower sprintcar on dirt – every day was a new surprise for them.

“The YouTube series will also take a look at the esports events including our rooftop race in downtown Los Angeles and on Treasure Island in the middle of San Francisco Bay as well as their chance to work with Formula 1 legends Juan Pablo Montoya and Rubens Barrichello.”

Montoya worked alongside mentors Jann Mardenborough and Rudy van Buren as the head judge for the competition. For the final day of competition, Montoya brought along his former F1 rival, close friend and fellow esports enthusiast Rubens Barrichello to help decide who would be the winner.

Season one of World’s Fastest Gamer was shown around the world reaching more than 400 million viewers across leading networks including ESPN, Sky, CNBC and Fox Sports.

Season two will expand from a four-part to a six-part series and will debut early in 2020.

Jerry Milani is a freelance writer and public relations executive living in Bloomfield, N.J. He has worked in P.R. for more than 30 years in college and conference sports media relations, two agencies and for the International Fight League, a team-based mixed martial arts league, and now is the PR manager for FAN EXPO, which runs pop culture and celebrity conventions across North America. Milani is also the play-by-play announcer for Caldwell University football and basketball broadcasts. He is a proud graduate of Fordham University and when not attending a Yankees, Rams or Cougars game can be reached at Jerry (at) JerryMilani (dot) com.
@gbpackjerry
Previous NLL, Grabyo Partner To Deliver Real Time Game Highlights
Next San Diego Seals To Host Historic National Lacrosse League Game In Las Vegas