Jerry Milani December 4, 2019 News, On The Air Comments Off on Pac-12 Networks To Televise No. 3 Stanford Volleyball’s NCAA Tournament Opener This Friday 907 Views 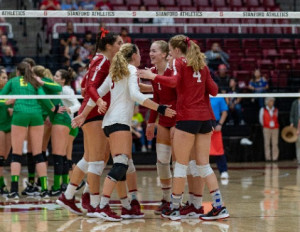 Pac-12 Networks announced today that it will broadcast No. 3 Stanford’s NCAA volleyball tournament opener this Friday, Dec. 6 at 7 p.m. PT / 8 p.m. MT against Denver. The contest will be available on the Pac-12 Now app and Pac-12 Bay Area. Full programming information and talent assignments for the game are as follows:
PAC-12 IN THE NCAA TOURNAMENT:
HOW TO WATCH
ncaa pac-12 volleyball 2019-12-04
Jerry Milani
Share

Jerry Milani is a freelance writer and public relations executive living in Bloomfield, N.J. He has worked in P.R. for more than 30 years in college and conference sports media relations, two agencies and for the International Fight League, a team-based mixed martial arts league, and now is the PR manager for FAN EXPO, which runs pop culture and celebrity conventions across North America. Milani is also the play-by-play announcer for Caldwell University football and basketball broadcasts. He is a proud graduate of Fordham University and when not attending a Yankees, Rams or Cougars game can be reached at Jerry (at) JerryMilani (dot) com.
@gbpackjerry
Previous Four-time Olympic Medalist Angela Ruggiero To Host ‘The Fluid Fan’ Podcast
Next ‘Being Guillen’ Podcast To Debut Friday At La Vida Baseball