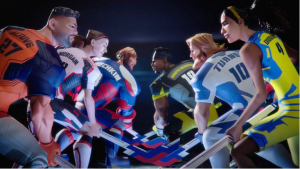 Apple this week revealed Ultimate Rivals from Bit Fry Game Studios, Inc., a new sports game franchise that brings together athletes across hockey, basketball, football, baseball and soccer into a single officially licensed videogame, a first in sports and gaming. In Ultimate Rivals: The Rink, the first title in the franchise, players choose from more than 50 superstar athletes to compete in exciting two on two hockey matches. Players can combine Alex Ovechkin and Alex Morgan against De’Aaron Fox and Jose Altuve or Skylar Diggins-Smith and Wayne Gretzky. Different combinations of heroes unlock unique ways to play and win against the AI or other gamers in online multiplayer matches. On the ice, the action is driven by players’ quick reflexes and are brought to life with stylized visuals and immersive sound FX. Ultimate Rivals: The Rink launches today on Apple Arcade across iPhone, iPad, Apple TV and Mac and will be followed by an NBA licensed basketball game, Ultimate Rivals: The Court in Spring 2020.

“We are ripping up the sports videogame rule book and re-writing it for a new generation. We’re starting with the gamer first and empowering their imagination to create the ultimate team of athletes across sports, in a way only they can envision,” said Ben Freidlin, CEO and founder of Bit Fry Game Studios and the creator of Ultimate Rivals.

“Bit Fry is disrupting this entire category. I’ve always said that sports bring us together, and now Bit Fry is bringing all sports together. It’s bold and ambitious, and it’s never been done before,” said David Stern, NBA Commissioner Emeritus, an early investor in the studio and an advisor to the Bit Fry CEO.

Jerry Milani is a freelance writer and public relations executive living in Bloomfield, N.J. He has worked in P.R. for more than 30 years in college and conference sports media relations, two agencies and for the International Fight League, a team-based mixed martial arts league, and now is the PR manager for FAN EXPO, which runs pop culture and celebrity conventions across North America. Milani is also the play-by-play announcer for Caldwell University football and basketball broadcasts. He is a proud graduate of Fordham University and when not attending a Yankees, Rams or Cougars game can be reached at Jerry (at) JerryMilani (dot) com.
@gbpackjerry
Previous NLL San Diego Seals To Play Regular-Season Game On Runway Of Marine Corps Air Station – Miramar
Next NFL Football on Twitch Gaining Yards According to Torque Esports Data Experts