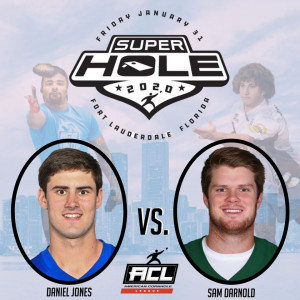 The American Cornhole League (ACL), the originator of competitive cornhole, is thrilled to announce that the Quarterbacks from both New York Football teams, Daniel Jones and Sam Darnold will step off the gridiron and onto the cornhole court for a special ESPN broadcast leading into the Big Game.

The face-off, which will be held at the Broward Convention Center from 9-10pm on Friday (1950 Eisenhower Blvd., Ft Lauderdale, Fla. 33316), is open for free to the public and expected to draw 2,000+ fans on-site with VIP seats also available for $25. The competition will be the crown jewel of a 3-day series of events hosted by the ACL. In addition to the ACL’s scheduled ESPN telecasts, the Darnold and Jones competition will air on ESPN2 as a 1-hour special on Sunday, Feb. 2nd. The first broadcast will take place prior to kickoff at 5:00pm ET and will re-air again at 11:30pm ET, immediately following the Big Game.

“Being from Charlotte cornhole was always around – to watch it evolve from a backyard game to a full-fledged sport with American Cornhole League leading the way has been exciting,” said Big Blue starting quarterback Daniel Jones. “Plus, the opportunity to take Sam on heads up was something I couldn’t pass on. Hopefully sometime soon we’ll be doing it on the gridiron in the big game!”

“While I wish I was going to be on the field this weekend, this is a nice consolation prize – and another opportunity to take home a win for Gang Green against a cross-town rival,” added Gang Green starting quarterback Sam Darnold. “Daniel’s a great competitor, but I’ve been practicing and feel good about my odds!”

“This is an opportunity for us to showcase just how far the game has come, with two of the most exciting young QB’s in the nation teaming up with some of the top cornhole pros in the country,” said Stacey Moore, Commissioner and Founder of the American Cornhole League. “It’s really a treat for the fans, and the perfect way to whet their appetite ahead of the big game on Sunday.”

The American Cornhole League hosts competition and tournaments across the amateur, collegiate, and pro ranks with thousands of players taking part every year. For additional information on how to participate visit iplaycornhole.com.

Jerry Milani is a freelance writer and public relations executive living in Bloomfield, N.J. He has worked in P.R. for more than 30 years in college and conference sports media relations, two agencies and for the International Fight League, a team-based mixed martial arts league, and now is the PR manager for FAN EXPO, which runs pop culture and celebrity conventions across North America. Milani is also the play-by-play announcer for Caldwell University football and basketball broadcasts. He is a proud graduate of Fordham University and when not attending a Yankees, Rams or Cougars game can be reached at Jerry (at) JerryMilani (dot) com.
@gbpackjerry
Previous National Lacrosse League To Host First-Ever Team Business Summit In Las Vegas This Week
Next NHL Network To Televise Final Three Contests of Rivalry Series