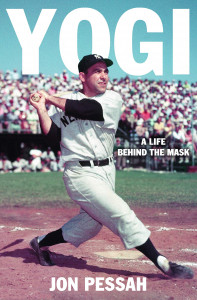 There is something about saying the name “Yogi Berra” that puts a smile on your face. Fans under, say, 60, didn’t see him play live, but his feats on the diamond are legendary: the bad-ball hitter who won three MVPs and 10 World Series rings. (10!) No one is close to that kind of winning.

But it’s not just his success between the lines that make Yogi the household name he remains 55 years after his last game and three decades after he last suited up as an official coach, with the Astros in 1989. No, it’s everything else about this true American treasure that transcended baseball: indeed Yogi is a pop culture icon of the highest order.

It’s in this spirit that author Jon Pessah brings us Yogi: A Life Behind the Mask (Little, Brown and Company, 576 pps., $30.00), a veritable love letter to the man who put smiles on millions of faces worldwide in his 90 years on earth. Pessah focuses on the positive—and with Yogi, how is it possible to go any other way? 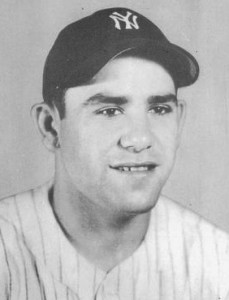 The book traces Yogi’s Italian-American roots in The Hill, the ethnic section of St. Louis where “Lawdie,” as he was known in his youth, met lifelong friend Joe Garagiola as pre-teens. And though at first it was Joe who garnered most of the attention for his ballplaying skill and matinee idol looks, it was Lawdie whose talents and smarts turned into a Hall of Fame career (and posthumous Presidential Medal of Freedom!).

Of course both Garagiola and Berra gained fame beyond their baseball careers; Garagiola as a media personality and Berra through sheer force of his personality–and the malapropisms that are attributed to him, whether he said them or not. (Wikipedia’s definition of malapropism actually uses a Yogi quote in its entry!)

But, as Pessah emphasizes throughout the book, to take the quotes at face value was to underestimate a man who, while only educated through to eighth grade per custom on The Hill, was shrewd and highly intelligent in baseball and business. Recognizing his true value and not settling for less became a trademark, the bar established early in his adult life; when Garagiola was offered $500 as a signing bonus to Yogi’s $250 after a Cardinals tryout, Lawdie would have none of it, instead falling into the Yankees’ hands, the two home teams failing to land maybe the best catcher in history from right in their backyard. That extended to his contracts as player, coach and manager, and to his many endorsements from Yoo-Hoo to Aflac to Miller Lite and many others. “Show me,” indeed. 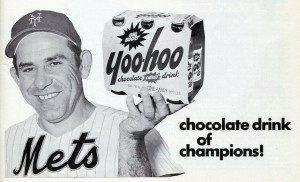 Even in a charmed life that included a more than six-decade marriage to beautiful and brilliant Carmen Short, the love and respect of thousands of players and millions of fans, and the opening of his namesake museum in Little Falls, N.J., there were a few struggles, beyond the challenges growing up on The Hill presented. Professionally, the refrain that Berra was “too nice” to be a manager wasn’t much disproved in three stints at the helm, two with the Yankees and one with the crosstown Mets. Personally, Yogi and Carmen dealt with the revelation of their youngest son Dale’s drug use and connection to the 1980s cocaine scandals in the sport. But what comes through even these tribulations, well detailed by Pessah, is that Yogi always remained true to himself, which ultimately allowed him to overcome both issues and gain almost universal acclaim. 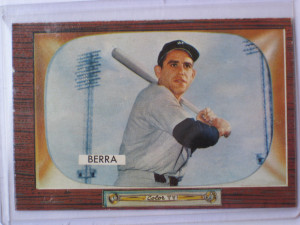 With logic such as “It ain’t over ’til it’s over” and “It’s deja vu all over again,” Yogi-isms have become part of the American lexicon. But as Pessah makes clear, the quotes alone would not have made Yogi into the cultural icon he became. And while they were a big part of what vaulted his “Q” rating before that term came into vogue, Yogi’s was a life fully lived. Even if he “really didn’t say everything I said.”

Jerry Milani is a freelance writer and public relations executive living in Bloomfield, N.J. He has worked in P.R. for more than 30 years in college and conference sports media relations, two agencies and for the International Fight League, a team-based mixed martial arts league, and now is the PR manager for FAN EXPO, which runs pop culture and celebrity conventions across North America. Milani is also the play-by-play announcer for Caldwell University football and basketball broadcasts. He is a proud graduate of Fordham University and when not attending a Yankees, Rams or Cougars game can be reached at Jerry (at) JerryMilani (dot) com.
@gbpackjerry
Previous America’s Boating Channel LIVE Showcases Talent
Next Rays, Nationals Top Standings, April Awards Issued In Strat-O-Matic Baseball 2020 Season Simulation