Jerry Milani October 2, 2020 News Comments Off on The Women’s Sports Foundation Announces President-Elect and New Board of Trustees Members 758 Views 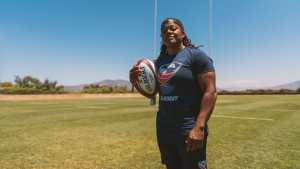 The Women’s Sports Foundation (WSF) announced today its president-elect and two new members joining the Board of Trustees. World Rugby Hall of Famer Phaidra Knight was voted in as president-elect, and is joined by newly-elected Board members Brett Goodman and LaChina Robinson. Knight has been serving as a WSF Trustee since 2018, and now Goodman and Robinson join the elite group of cross-sector experts that help guide the Women’s Sports Foundation’s operations as well as its mission, to unlock the possibilities in every girl and woman through the power of sport.

“We are thrilled for Phaidra and excited to welcome Brett and LaChina – amazing professionals who are fellow game-changers in our fight for gender equity in sports,” said WSF CEO, Deborah Antoine. “Each brings a wonderfully diverse range of knowledge and experiences to WSF, and we look forward to working together, and advancing our mission, to unlock the potential of girls and women in sport and in life.”

Knight will serve a one-year term as president starting January 2021, succeeding current WSF President and six-time Paralympic medalist Alana Nichols. She brings a unique perspective to the WSF as the first African-American woman inducted into the World Rugby Hall of Fame, a creative entrepreneur, and social advocate. Knight is a law school graduate, a rugby analyst for various sports media outlets, and is the founder of her own, recently-launched active wear clothing line, PSK Collective. She has a long tenure with WSF, having started as an advocacy intern, served as a WSF Athlete Ambassador, and as a member of the Board of Trustees.

To learn more about the newest members of WSF leadership, please find their bios below:

Phaidra Knight, J.D. is a World Rugby Hall of Fame inductee, sports media talent, motivational speaker, entrepreneur, and mixed martial artist. One of the premier players in the sport of rugby, she made three appearances in the Rugby World Cup, was selected as the top player in the world in two different positions, was named the USA Rugby Player of the Decade in 2010, and became the first African American and eighth woman inducted into the World Rugby Hall of Fame. In 2017, Knight was named head coach of the newly formed Monroe College women’s rugby team in the Bronx, New York, and she has served as a director and coach of Play Rugby USA, the premier Olympic nonprofit dedicated to reaching kids in underserved communities in New York.

Earlier this year, Knight launched PSK Collective, a fusion of activewear and streetwear for girls and women, and she is also the founder of PeaK Unleashed, a non-profit organization devoted to cultivating personal and physical development of marginalized youth through rugby and yoga. She is a keynote speaker, addressing many audiences on leadership, resilience, LGBTQ rights, race, and anti-bullying. Concurrently, Knight works as a Rugby Analyst for NBC Sports, ESPN, and CBS Sports, and serves on the Board of Trustees for the Women’s Sports Foundation.

Brett Goodman serves as General Counsel for the NBC Sports Group. In this role, he manages a team of lawyers and other personnel responsible for all legal matters related to each of NBCUniversal’s sports-related businesses and platforms, including NBC (the broadcast television network), NBC Olympics, NBCSN, Golf Channel, GolfNow, various regional sports networks, and SportsEngine, among many others. He has served as lead drafter of NBC’s multiple winning Olympic rights bids through 2032, and led NBC’s legal team in groundbreaking negotiations with the National Football League, National Hockey League, PGA TOUR, United States Golf Association, NASCAR, FIFA, and more. He also has represented NBC in numerous foreign countries related to Olympic and other business, and he is among NBC’s key liaisons to the International Olympic Committee, United States Olympic and Paralympic Committee, the Los Angeles Organizing Committee for the 2028 Games, and many domestic Olympic-sport national governing bodies. Goodman won a Sports Emmy Award as a researcher for the 1992 Olympic Games in Barcelona. He graduated with a bachelor’s degree from Princeton University and is also a graduate of Columbia University Law School.

Since 2013, Goodman has served as NBC’s representative on the WSF’s Partner Advisory Council, and he is a board member for the Lindsey Vonn Foundation. He is actively involved with Cycle for Survival, the nationwide movement to battle rare cancers associated with Memorial Sloan Kettering Cancer Center, which was founded by his sister, Jennifer Goodman Linn.

LaChina Robinson is an award-winning basketball analyst for ESPN just finishing her 11th season of college basketball and entering her 12th season of WNBA coverage. Her work around the sport as an analyst and reporter spans a wide range of collegiate, WNBA and NBA events during the regular season, NCAA Tournament, playoffs, finals, and draft coverage. Robinson is also the host of espnW podcast “Around The Rim,” which was chosen as one of the best sports podcasts of 2017 by Sports Illustrated. LaChina was a student-athlete at Wake Forest University where she achieved All-ACC recognition both in the classroom and on the court. Robinson has been inducted into two Hall of Fames in her hometown including the Inaugural Alexandria City Public School’s Athletic Hall of Fame in 2015.

In 2008 LaChina became Founder and CEO of her own consulting company, “Stretch Beyond” through which she serves as a Transition Coach for women and athletes. In 2018 Robinson received high honors as the recipient of the Dawn Staley Excellence in Broadcasting Award. In 2020 LaChina was recognized with the Giving Gracefully Award as a nod to her work as co-founder of her own non-profit, Rising Media Stars, which is a mentorship and training program for young women of color who want to start a career in sports broadcasting.

Jerry Milani is a freelance writer and public relations executive living in Bloomfield, N.J. He has worked in P.R. for more than 30 years in college and conference sports media relations, two agencies and for the International Fight League, a team-based mixed martial arts league, and now is the PR manager for FAN EXPO, which runs pop culture and celebrity conventions across North America. Milani is also the play-by-play announcer for Caldwell University football and basketball broadcasts. He is a proud graduate of Fordham University and when not attending a Yankees, Rams or Cougars game can be reached at Jerry (at) JerryMilani (dot) com.
@gbpackjerry
Previous BIG EAST Conference Selects EGF As Its Esports Governance, Marketing And Distribution Partner
Next OmniView’s GameChangr Seeks To Personalize Fantasy Broadcast Experience