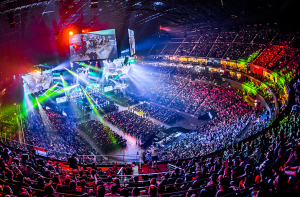 Today, the BIG EAST Conference and the Electronic Gaming Federation (EGF) announced a three-year agreement that will enable all 11 member schools to compete in a year-long multigame season for the first time as official EGF Collegiate (EGFC) league members. EGFC is the national Division I Varsity Esports League with a growing number of schools bringing their own elite teams together to vie for National Championships across a number of game titles.

The EGFC Season begins October 5 and features nationwide intercollegiate competition in two eight-week splits as well as conference championships, regional playoffs and the EGFC National Championship to be held April 24-25, 2021. Expanded titles include: Rocket League, Overwatch, SSBU and FIFA. Broadcasts of all matches will be streamed on EGF’s 5 Twitch channels, the BIG EAST YouTube channel and various institutional platforms.

“We’re very excited that the relationship BIG EAST esports has enjoyed with EGF will be continuing for the next three years with league membership across many titles,” said BIG EAST Commissioner Val Ackerman. “We’re grateful for the outstanding leadership EGF provides annually to collegiate esports and look forward to partnering to bring compelling rivalry matches and broadcasts to our fans around the country.”

“We are honored to have earned the trust and respect of all the BIG EAST schools and conference leadership,” said Eric Johnson, CEO, EGF. “EGF is attracting teams who want to play against the biggest and best programs across the country for a national championship, want to have a voice and a stake in their governance, and want a partner who has the students’ passions as the top priority.

In addition to the BIG EAST’s conference wide affiliation with EGF, a growing number of other colleges and Universities are selecting EGF not only based on their competitive governance, but their commitment to serving esports communities and teams on campus and virtually through strategic partnerships, educational development, wellness, diversity and inclusion and industry leadership programs.

The esports (competitive video games) has generated more than $1 billion globally in 2019 and is expanding exponentially throughout 2020. By 2022, the growth of esports from a competition and viewer standpoint is expected to exceed 300 million participants. Division I collegiate programs began in earnest in 2015 and now feature more than 100 teams in the U.S.

Jerry Milani is a freelance writer and public relations executive living in Bloomfield, N.J. He has worked in P.R. for more than 30 years in college and conference sports media relations, two agencies and for the International Fight League, a team-based mixed martial arts league, and now is the PR manager for FAN EXPO, which runs pop culture and celebrity conventions across North America. Milani is also the play-by-play announcer for Caldwell University football and basketball broadcasts. He is a proud graduate of Fordham University and when not attending a Yankees, Rams or Cougars game can be reached at Jerry (at) JerryMilani (dot) com.
@gbpackjerry
Previous Preakness Stakes To Air Live On SiriusXM
Next The Women’s Sports Foundation Announces President-Elect and New Board of Trustees Members