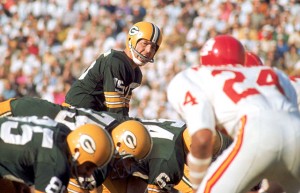 Anticipation was high — form this Packers fan and plenty of other football enthusiasts — when NFL Network announced that it would be airing its pieced-together Super Bowl I full game, complete with Jim Simpson’s radio call.

The disappointment that followed — seven or more talking heads drowning out Simpson, adding little to the three-hour presentation, was poorly received, to say the least. But the league’s official network will attempt to make amends this Friday at 8 p.m., when it will run the footage taken mostly from NFL Films coverage.

According to NBC Sports’ Michael David Smith, the 90-minute broadcast will be preceded by an intro from host Chris Rose (hopefully a very brief one), then the original radio broadcast over the footage.

Ready for that for sure!

Jerry Milani is a freelance writer and public relations executive living in Bloomfield, N.J. He has worked in P.R. for more than 30 years in college and conference sports media relations, two agencies and for the International Fight League, a team-based mixed martial arts league, and now is the PR manager for FAN EXPO, which runs pop culture and celebrity conventions across North America. Milani is also the play-by-play announcer for Caldwell University football and basketball broadcasts. He is a proud graduate of Fordham University and when not attending a Yankees, Rams or Cougars game can be reached at Jerry (at) JerryMilani (dot) com.
@gbpackjerry
Previous All Ochocinco All The Time
Next Hank Haney Signs Multi-Year Deal, Expands to Daily Show Exclusively on SiriusXM PGA TOUR Radio