Home / News / All Ochocinco All The Time

All Ochocinco All The Time 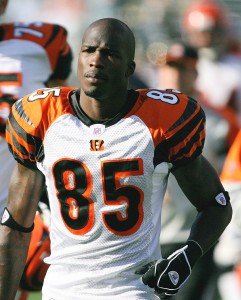 Chad “Ochocinco” Johnson has always been nothing if not entertaining.  “Dancing with the Stars, Major League Soccer tryouts, reality television, business ventures big and small, tryouts with the PBR and oh yes a career in both the NFL and the CFL along with a name change here or there, run-in’s with the law, have made him a must follow on social media.

Now it looks like he will be a “Must listen” as well, at least for some unique commentary (and there probably is lots after the Bengals, his former team, and their meltdown this weekend). On Tuesday DGital Media, a quick growing player in the audio space (they also launched  “The Vertical Podcast with Woj with Yahoo Sports NBA reporter Adrian Wojnarowski, and one with Jeremy Roenick in December) announced a weekly audio series called “Ochocinco and Dukes “ with “Ochocinco” and ex NFL’er now commentator Jamie Dukes. The audio series will publish new episodes each Tuesday, along with regular breaking news reports throughout the year. Fans can find the podcast on iTunes, Stitcher and the TuneIn audio platform. Here is a link to the first episode.

“We are pleased to add Chad and Jamie to our growing list of digital audio storytellers in the fast-growing engagement audio in demand category,” said Chris Corcoran, Chief Content Officer, DGital Media and one of several former NBC Sports radio execs now reunited in the new venture, in a statement, “Chad’s cross-generational appeal, his knowledge of the space and his ability to engage and interact with both fans and celebrities will make him a ‘must-listen,’ and Jamie’s expertise and calming influence will give the podcast a great balance. They fit our growing business model really well and we are looking forward to listening in, as will thousands of others as the show grows in stature.”

“I am really excited to be working with Jamie on this podcast. It is a great way for us both to engage and have fun with our fans,” Ochocinco also added. “Podcasts are a fast-growing platform, and the people at DGital Media will do a great job. Jamie and I have some really fun things in store for the listeners and we won’t be talking about just football, I promise you that!”

The podcasting/on-demand audio category is quickly becoming one to follow as athletes and celebrities look to again control their own message, this time without the boundaries of video recording. It is fast, easy and clear well produced in the spoken word, and Lord knows Ochocinco likes to talk, and should have some engaging friends joining in.

Jerry Milani is a freelance writer and public relations executive living in Bloomfield, N.J. He has worked in P.R. for more than 30 years in college and conference sports media relations, two agencies and for the International Fight League, a team-based mixed martial arts league, and now is the PR manager for FAN EXPO, which runs pop culture and celebrity conventions across North America. Milani is also the play-by-play announcer for Caldwell University football and basketball broadcasts. He is a proud graduate of Fordham University and when not attending a Yankees, Rams or Cougars game can be reached at Jerry (at) JerryMilani (dot) com.
@gbpackjerry
Previous ‘Terry Collins: A Life In Baseball’ Premieres Tonight
Next NFL Network to Air Super Bowl I Replay Friday – Sans Talking Heads