Jerry Milani December 11, 2015 News, On The Air Comments Off on EPIX® and NHL to Debut Second Season of ‘EPIX Presents Road To the NHL Winter Classic™’ Wednesday 2,723 Views 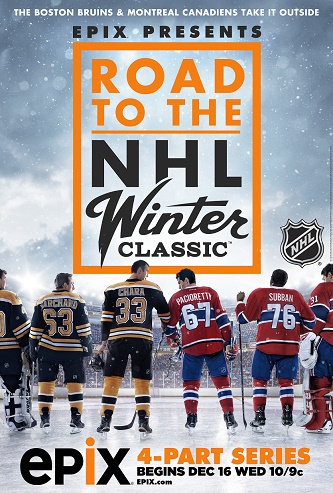 EPIX Presents Road To the NHL Winter Classic™ will make its U.S. Television Premiere Wednesday, December 16 at 10pm ET/PT, 9CT. The weekly series, consisting of four one-hour episodes, will focus on the heated rivalry between the Boston Bruins and the Montreal Canadiens and their journey as they head toward the 2016 Bridgestone NHL Winter Classic® at Gillette Stadium in Foxborough, Mass. on New Year’s Day 2016. In addition, U.S. hockey fans will be able to stream each episode of EPIX Presents Road To the NHL Winter Classic™ live as it premieres on EPIX via EPIX.com, NHL.com and BostonBruins.com.

Produced by 53-time Emmy® award winner Ross Greenburg, narrated by Bill Camp (Black Mass, 12 Years a Slave) and presented in partnership with NHL Original Productions, this is the second year that EPIX and the NHL® team up to provide viewers with exclusive access to the players and coaches – in their professional and personal settings, capturing all the action, camaraderie, drama, humor, heartaches and triumphs as they unfold. Two of the NHL’s most storied franchises, the Bruins and Canadiens have faced off against each other more than any other two teams in NHL history. When these long-time rivals meet on Jan. 1, Boston will become the first Club to host the Bridgestone NHL Winter Classic® for a second time, after defeating the Philadelphia Flyers 2-1 in overtime of the 2010 Bridgestone NHL Winter Classic® at Fenway Park. It will mark the first time the Canadiens will play in the Bridgestone NHL Winter Classic®, and just the second time a Canadian-based NHL team will participate in the event, following the Toronto Maple Leafs’ appearance in 2014. Join the conversation about #WinterClassic on Twitter at http://twitter.com/EpixHD and http://twitter.com/NHL, on Facebook at http://Facebook.com/EPIX and http://Facebook.com/NHL.

EPIX Presents Road To the NHL Winter Classic™ is an EPIX Original series in partnership with NHL Original Productions. Ross Greenburg is the executive producer; Steve Stern is the coordinating producer; Mike Greenburg, Alicia Zubikowski, Peter Rogaris, and Jonathan Fierro are the producers; Aaron Cohen is the writer; Peter Franchella is the director of photography; and John Sands and Wayne Sharpe are the composers. Bill Camp is the narrator. Mark S. Greenberg, Jocelyn Diaz and Ross Bernard are the executive producers for EPIX, and Jill Burkhart and Valerie Bishop are the producers for EPIX.

Jerry Milani is a freelance writer and public relations executive living in Bloomfield, N.J. He has worked in P.R. for more than 30 years in college and conference sports media relations, two agencies and for the International Fight League, a team-based mixed martial arts league, and now is the PR manager for FAN EXPO, which runs pop culture and celebrity conventions across North America. Milani is also the play-by-play announcer for Caldwell University football and basketball broadcasts. He is a proud graduate of Fordham University and when not attending a Yankees, Rams or Cougars game can be reached at Jerry (at) JerryMilani (dot) com.
@gbpackjerry
Previous See Trailer For ‘Baltimore Baseball Before The Birds’
Next Yanks’ Miller, McCann, Mets’ Familia Among Thurman Munson Award Honorees