Breidinger races full-time in NASCAR’s ARCA series for Venturini Motorsports, a Toyota Racing Development Team. “Teaming up with WSF for a race at a historic track like Talladega stands for everything that I believe in when it comes to supporting women in sports,” said 22-year-old Breidinger. “As one of three females running a full season at a National level in NASCAR, it’s important to me to bring awareness to the sport and having WSF on my car for the race is a step in the right direction.”

Breidinger will be working closely with WSF to shine light on the importance of female empowerment in motorsport. Motorsports is one of the only sports where men and women compete professionally together.

“The Women’s Sports Foundation works to unlock the possibilities in every girl and woman through the power of sport,” said Danette Leighton, WSF CEO. “Seeing a female race car driver blazing around the Talladega Superspeedway can encourage and inspire girls everywhere to recognize their own power and potential. We are grateful to our WSF Athlete Ambassador Toni Breidinger for including WSF signage on her car, and we’ll be rooting her on for a great race and season ahead!”

Jerry Milani is a freelance writer and public relations executive living in Bloomfield, N.J. He has worked in P.R. for more than 30 years in college and conference sports media relations, two agencies and for the International Fight League, a team-based mixed martial arts league, and now is the PR manager for FAN EXPO, which runs pop culture and celebrity conventions across North America. Milani is also the play-by-play announcer for Caldwell University football and basketball broadcasts. He is a proud graduate of Fordham University and when not attending a Yankees, Rams or Cougars game can be reached at Jerry (at) JerryMilani (dot) com.
@gbpackjerry
Previous Topps Debuts Chet Holmgren Cards by Three Noted Artists 
Next I Am Athlete Inks Content Deal with SiriusXM 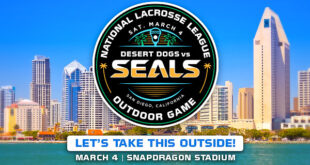