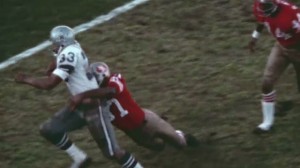 NFL Network’s new documentary series The Timeline from NFL Films continues with A Tale of Two Cities, a two-part film examining the rivalry between the San Francisco 49ers and Dallas Cowboys, and the incredible impact each franchise has had on its city.

On the surface, no two cities could be more different than San Francisco and Dallas. But thanks to a unique football relationship that evolved over the course of three decades, they came to have much in common. In these two distinct locations, two football and cultural stories were being written simultaneously, until one day they would be so intertwined as to produce a third narrative: the tale of the greatest NFL rivalry of the Super Bowl era.

Among the topics discussed in A Tale of Two Cities are:

A Tale of Two Cities includes interviews with the following people and more:

Jerry Milani is a freelance writer and public relations executive living in Bloomfield, N.J. He has worked in P.R. for more than 30 years in college and conference sports media relations, two agencies and for the International Fight League, a team-based mixed martial arts league, and now is the PR manager for FAN EXPO, which runs pop culture and celebrity conventions across North America. Milani is also the play-by-play announcer for Caldwell University football and basketball broadcasts. He is a proud graduate of Fordham University and when not attending a Yankees, Rams or Cougars game can be reached at Jerry (at) JerryMilani (dot) com.
@gbpackjerry
Previous Yanks’ Miller, McCann, Mets’ Familia Among Thurman Munson Award Honorees
Next Hosts of ESPN Radio’s ‘Mike & Mike’ to Be Inducted into the NAB Broadcasting Hall of Fame