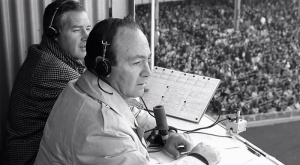 For over a half century, Marty Glickman was the pre-eminent voice of New York sports – and perhaps the most influential sports broadcaster of all time.

Beginning as radio announcer of the original New York Knicks n 1946, he created a now-familiar sports lexicon, including swish! Yet Glickman – who would also become the distinctive voice of the Giants and Jets and Yonkers Raceway, etc. – became almost as famous for what he did not do. A great track athlete, he was denied the opportunity to compete on the U.S. Olympic team during the 1936 Berlin Games due to anti-Semitism.

The Yogi Berra Museum in Little Falls, N.J., will screen the acclaimed James Freedman documentary Glickman on Feb. 11 at 7:30 p.m., The film will be followed by a discussion with Ian Eagle, one of many professional broadcasters mentored by Glickman, who is also highlighted in the Museum’s current exhibit, “Now Doing the Talking,” a tribute to pioneer athletes-turned-broadcasters.

Jerry Milani is a freelance writer and public relations executive living in Bloomfield, N.J. He has worked in P.R. for more than 30 years in college and conference sports media relations, two agencies and for the International Fight League, a team-based mixed martial arts league, and now is the PR manager for FAN EXPO, which runs pop culture and celebrity conventions across North America. Milani is also the play-by-play announcer for Caldwell University football and basketball broadcasts. He is a proud graduate of Fordham University and when not attending a Yankees, Rams or Cougars game can be reached at Jerry (at) JerryMilani (dot) com.
@gbpackjerry
Previous SiriusXM Announces Sports and Entertainment Programming for Super Bowl Week
Next Red Bull Global Rallycross Returns to NBC and NBCSN in 2016