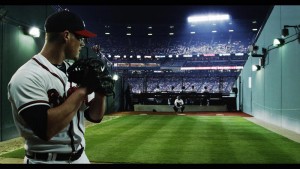 The 90-minute film is a remarkable journey into the science of baseball’s signature pitch, featuring amazing footage and observations from current MLB stars and at least 20 Hall of Famers.

In a speed and statistic-obsessed sport, Hank Aaron, Nolan Ryan, Bob Gibson, Goose Gossage, Derek Jeter and new Yankee closer Aroldis Chapman are among those discussing how the magic of baseball boils down to the 396 milliseconds it takes a 100 mph fastball to reach home plate.

“Fastball,” was first presented at the 2015 Tribeca Film Festival by Hock, a 9-time Emmy Award-winner who is also known for his work in ESPN’s 30 for 30 series.

Jerry Milani is a freelance writer and public relations executive living in Bloomfield, N.J. He has worked in P.R. for more than 30 years in college and conference sports media relations, two agencies and for the International Fight League, a team-based mixed martial arts league, and now is the PR manager for FAN EXPO, which runs pop culture and celebrity conventions across North America. Milani is also the play-by-play announcer for Caldwell University football and basketball broadcasts. He is a proud graduate of Fordham University and when not attending a Yankees, Rams or Cougars game can be reached at Jerry (at) JerryMilani (dot) com.
@gbpackjerry
Previous HITN Scores Programming Partnership to Add Weekly Sports to Its Lineup
Next Your Brackets Just Got More Valuable