Jerry Milani March 29, 2016 News, On The Air Comments Off on World Tennis With Harry Cicma – Returns For 8th Season – Airing On National And International Television 4,012 Views 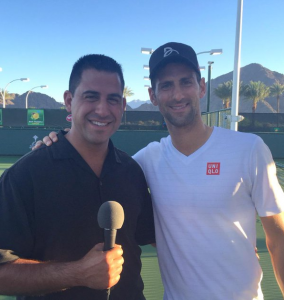 “World Tennis with Harry Cicma” will return for an eighth season on National and International Television.  The Series will premiere on June 1st, and consists of 12 Episodes, each airing twice for 12 consecutive weeks.

The New England Sports Network (NESN) is the flagship station for both the Boston Red Sox and Boston Bruins and is available on New England cable systems and nationally – in both standard definition and high definition through satellite TV providers DirectTV (Channel 628) and Dish Network (Channel 434). The Red Sox are a co-founder and majority owner (80 percent) of NESN with the Bruins owning the remaining 20 percent. NESN is delivered to over 4 million homes throughout New England and consistently receives higher ratings of any other national or regional sports channels in the region combined.

Cicma is an Emmy award-winning reporter and on-air correspondent for NBC Sports and WNBC News, the former sports producer and anchor at NBC in Providence, R.I. and CBS in Springfield, Mass., and ABC in Sioux City, Iowa. He is the co-founder and host of “World Tennis with Harry Cicma” and also served as a commentator for other networks including Fox Sports Net and Tennis Channel and the U.S. Open tennis championship’s world feed. He is the TV voice of World Team Tennis, also host & producer of FOX Sports’ Ping Pong coverage, along with other productions on SNY, FOX, NESN and Comcast SportsNet. A former world-ranked doubles player, he is a graduate of Rutgers University.  World Tennis is produced by Harry Cicma Productions LLC (HarryCicmaProductions.com).

Jerry Milani is a freelance writer and public relations executive living in Bloomfield, N.J. He has worked in P.R. for more than 30 years in college and conference sports media relations, two agencies and for the International Fight League, a team-based mixed martial arts league, and now is the PR manager for FAN EXPO, which runs pop culture and celebrity conventions across North America. Milani is also the play-by-play announcer for Caldwell University football and basketball broadcasts. He is a proud graduate of Fordham University and when not attending a Yankees, Rams or Cougars game can be reached at Jerry (at) JerryMilani (dot) com.
@gbpackjerry
Previous The Unauthorized History Of Baseball In 100-Odd Paintings
Next Ken Burns’s ‘Jackie Robinson’ Set For PBS Debut April 11-12