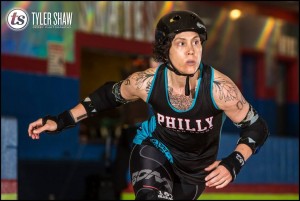 The Women’s Flat Track Derby Association has agreed with ESPN3 to deliver two broadcast events in 2016: a Division 1 doubleheader from the Emerald City Roller Girls’ (Eugene, OR) WFTDA-Recognized Tournament, The Big O, on April 30; and the final round of the 2016 International WFTDA Championships hosted by the Rose City Rollers (Portland, OR) on November 6. Both events will be streamed live in the United States through ESPN3 and on WFTDA.tv outside of the US, making these matchups easily accessible to millions of households worldwide.

Get all the information you need about accessing ESPN3 or Watch ESPN in the U.S. and on WFTDA.tv for the rest of the world at WFTDA.tv/espn.

The Division 1 and 2 Third Place and Championship games will be shown live on ESPN3 Nov. 6. The first two days of the tournament, Nov. 4 and 5, will be available via pay-per-view on WFTDA.tv, as they have been in past years. Viewers outside of the United States will be able to watch the entirety of Championships via WFTDA.tv.

The April broadcast marks the return of roller derby to ESPN3, after a successful inaugural broadcast from the 2015 International WFTDA Championships last year.

Jerry Milani is a freelance writer and public relations executive living in Bloomfield, N.J. He has worked in P.R. for more than 30 years in college and conference sports media relations, two agencies and for the International Fight League, a team-based mixed martial arts league, and now is the PR manager for FAN EXPO, which runs pop culture and celebrity conventions across North America. Milani is also the play-by-play announcer for Caldwell University football and basketball broadcasts. He is a proud graduate of Fordham University and when not attending a Yankees, Rams or Cougars game can be reached at Jerry (at) JerryMilani (dot) com.
@gbpackjerry
Previous TOPPS All About Now With Latest Offering
Next “TODAY” and NBC Olympics Serve as the Media Partners of the 13th Annual Race on April 17 in New York’s Central Park