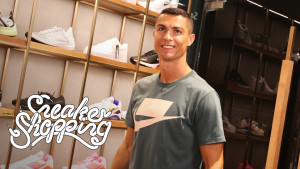 MSG Networks and Complex Networks today announced its plans for a “Complex Christmas,” which will feature 36 consecutive hours of original Complex and First We Feast programming on MSG Networks. The Christmas Day marathon will first kick-off at 6 p.m. tonight and run through Christmas.

Viewers can also look to engage on social during the marathon using the #MSGxComplex hashtag.

Jerry Milani is a freelance writer and public relations executive living in Bloomfield, N.J. He has worked in P.R. for more than 30 years in college and conference sports media relations, two agencies and for the International Fight League, a team-based mixed martial arts league, and now is the PR manager for FAN EXPO, which runs pop culture and celebrity conventions across North America. Milani is also the play-by-play announcer for Caldwell University football and basketball broadcasts. He is a proud graduate of Fordham University and when not attending a Yankees, Rams or Cougars game can be reached at Jerry (at) JerryMilani (dot) com.
@gbpackjerry
Previous In Washington, Continuing To Make A Monumental Jump In Gaming
Next FanHub Expands Relationship With ATP By Launching ATP Cup Bracket Challenge Game