12up, the pop culture infused sports digital media brand from Minute Media, has grown its unique monthly users from zero to over 6 million  (per recent Google Analytics) since its debut on May 24, making it the fastest growing sports publishers in the U.S.  As a social-first platform, 12up has generated more than 40 million social engagements (likes, comments, shares) during its first 90 days, with a social footprint of 10 million and growing.

12up features authentic and topical sports lifestyle content created by everyday sports fans. Part of the Minute Media family of sports publishers, which also includes 90min and a soon to be announced ESports brand, 12up provides a platform for fans to drive the conversation, both on and off the field. 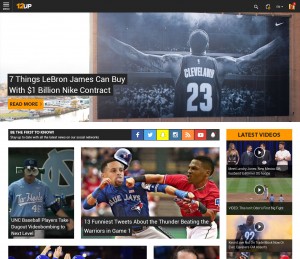 “Over the last three months, we’ve been focused on the tone and voice for our content operation and it’s paid off,” said Rich Routman, President of Minute Media. “While it’s still early days, we’ve identified an audience segment that the traditional sports media properties struggle to resonate with and we’ve successfully pulled them into our experience.”

Content creation from 12up editors and fan contributors has grown 150 percent since launch, with more than 100 pieces of content being added each day in English and approximately 45 pieces of content in Spanish.  12up remains one of the few U.S. sports platforms that has made Spanish language a priority since day one of its operation. As expected, given the focus on millennial males, 80 percent of 12up users consume the experience on mobile with 70 percent being between the ages of 18 and 24.

Looking ahead to the fourth quarter, 12up has plans to launch a dedicated product focused on the growing ESports community. There are currently approximately 20 pieces of ESports content being added to 12up each day as the platform ramps up for an official launch.

Jerry Milani is a freelance writer and public relations executive living in Bloomfield, N.J. He has worked in P.R. for more than 30 years in college and conference sports media relations, two agencies and for the International Fight League, a team-based mixed martial arts league, and now is the PR manager for FAN EXPO, which runs pop culture and celebrity conventions across North America. Milani is also the play-by-play announcer for Caldwell University football and basketball broadcasts. He is a proud graduate of Fordham University and when not attending a Yankees, Rams or Cougars game can be reached at Jerry (at) JerryMilani (dot) com.
@gbpackjerry
Previous Conference USA Partners With Campus Insiders
Next BAM! MLB Advanced Media Goes To College