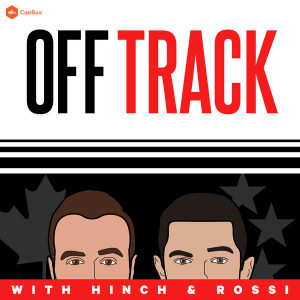 On March 22, CastBox, an award-winning global podcast platform, is launching its first original podcast, “Off Track with Hinch and Rossi” in collaboration with The Podglomerate and support from INDYCAR. This weekly podcast will provide a look into the lives of professional Indy car drivers, reality television stars, and great friends James Hinchcliffe and Alexander Rossi.

The “Off Track” podcast will be a fusion between sports, current events and popular culture – relatable to all listeners. Hinchcliffe (Hinch) and Rossi have seen plenty of success on the track and the show will highlight their off-the-track lives, including unfiltered opinions on what’s trending in pop culture. Guests on the show will consist of athletes, artists, and entrepreneurs discussing their careers and success stories. Special celebrity guests will include Pat McAfee, Tony Stewart, and John Green.

The show will be the first original production from CastBox, the fastest growing, highest rated podcast app on iOS and Android with more than 15 million users around the world. CastBox’s partner for creating “Off Track” is The Podglomerate, a podcast network that develops, promotes, and monetizes emerging podcasts, and the project has support from INDYCAR, the American-based sanctioning body for the premier open-wheel racing series in North America.

CastBox will distribute “Off Track with Hinch and Rossi” everywhere starting on March 22, 2018. The podcast series can be found here.

James Hinchcliffe is one of the most popular drivers in the Verizon IndyCar Series. Fans voted him IndyCar’s Favorite Driver in 2012, a year after he was named Verizon IndyCar Series Rookie of the Year in 2011. The 31-year-old suffered life-threatening injuries in a crash while practicing for the 2015 Indianapolis 500, ending his season after only five races. After a long road to recovery, James returned to racing the following year and earned his first INDYCAR pole at the 100th running of the Indianapolis 500, on the same track that almost destroyed his career. A year later, he was the runner-up on Season 23 of ABC’s Dancing With The Stars. If he isn’t on the track or in a ballroom, you can find James at Flat 12 Bierwerks in Indianapolis, where he brews his own craft beer, Hinchtown Hammerdown.

Alexander Rossi is a 26-year-old American race car driver in the Verizon IndyCar Series. He made the move to Indianapolis in 2016 after spending seven years in Europe climbing the ladder of the Formula One circuit. After just three months in IndyCar, Alex won the prestigious 100th running of the Indianapolis 500, and continued his on-track success in 2017. When not in a race car, Alex can be found on a bike, playing Mario Kart, or navigating his way out of escape rooms. He’s currently competing on Season 30 of the long-running CBS series The Amazing Race, becoming one of the most popular competitors on the show.

Jerry Milani is a freelance writer and public relations executive living in Bloomfield, N.J. He has worked in P.R. for more than 30 years in college and conference sports media relations, two agencies and for the International Fight League, a team-based mixed martial arts league, and now is the PR manager for FAN EXPO, which runs pop culture and celebrity conventions across North America. Milani is also the play-by-play announcer for Caldwell University football and basketball broadcasts. He is a proud graduate of Fordham University and when not attending a Yankees, Rams or Cougars game can be reached at Jerry (at) JerryMilani (dot) com.
@gbpackjerry
Previous ESPN Expands Its Partnership with STATS to Provide Live Optical Tracking for ACC Men’s Basketball Tournament
Next AfterBuzz TV moves into sports discussion launching Bonnie-Jill Laflin’s The Weekly Pass show