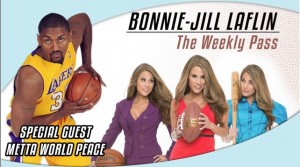 Joining Laflin on the panel each week are co-hosts, Becky Sattero and Josh Rodriguez. Sattero has worked with The LA Kings, LA Clippers, LA Galaxy and The Portland Trail Blazers. Rodriguez is a popular and respected digital personality and AfterBuzz Sports Producer.

“When it comes to fearless and groundbreaking women, in the world of sports broadcasting, Bonnie Jill is the poster child. Who else could lay claim to being the first and only NBA female scout, an NBA executive, and an NBA and NFL cheerleader, too, not to mention a network broadcaster.  Bonnie-Jill has shattered every wall in her path and I have no doubt that, in the digital arena, at AfterBuzz, she will do the same.”

“The sports podcast world has yet to find its Erin Andrews and AfterBuzz TV just did with Bonnie Jill. We are thrilled to have Bonnie Jill on our network.”

This week Metta World Peace (the basketball player formerly known as Ron Artest) joined the panel for a conversation about the current landscape of the NBA, his appearance on CBS’s Celebrity Big Brother, details about his philanthropic adventures (which include his new app and digital platform he created called, Gradelo, and his modern lifestyle brand, The Pandas Friend) – – ALL while getting a relaxing massage. Yes, you read that correctly: a massage.

Who Makes the Better Roommate: Kobe or Omarosa?

With being newly evicted from the Celebrity Big Brother house, to have a little fun, one of the first questions for Mr. World Peace was who is the better teammate, Kobe or Omarosa? “Kobe, because Kobe is not going to let me lose. Kobe’s the best,” he said.

How Lonzo Ball is willing to sacrifice more than Iverson and Kobe – Predicts one day he will be a Champion.

“He accepts the pressure and not many people can do that. I also like the fact he’s a rapper. He’s entrepreneurial. He’s got his own clothes, and he does what he wants. I also like the fact that he’s very patient. He’s a very patient guy. He sacrifices his shooting percentage for his team. This year, he would pass the ball and he would often be out of rhythm so then he’s missing 10 shots a game. Now his percentage is 20%. Everybody is banging on him about his percentage, but they don’t understand that if it was Kobe or Iverson, they’re not going to sacrifice their rhythm for another player. Lonzo does that. That’s what Lebron did when he would miss big shots because he was trying to give his other teammates some shine. That’s what Lonzo does. So Lonzo is going to be champion one day,” World Peace explains when asked about Lonzo Ball.

“In his prime, Kobe better than Lebron”

“If you want to compare primes. Kobe in his prime will definitely get the better. Kobe is too good,” said Mr. World Peace when asked about Kobe vs. Lebron.

“If the NCAA won’t pay you, find another way to get paid.”

With the news surfacing about the NCAA scandal Mr. World Peace had one very important point of view. “If you want to get paid, and the NCAA is not paying you, find another way to get paid. There’s so many opportunities out there.”

Tune in every Tuesday night at 9pm (PST) – don’t pass on the unique opportunity to gather with other fans and become a piece of the show by interacting through the live chat with the hosts and guests.

Jerry Milani is a freelance writer and public relations executive living in Bloomfield, N.J. He has worked in P.R. for more than 30 years in college and conference sports media relations, two agencies and for the International Fight League, a team-based mixed martial arts league, and now is the PR manager for FAN EXPO, which runs pop culture and celebrity conventions across North America. Milani is also the play-by-play announcer for Caldwell University football and basketball broadcasts. He is a proud graduate of Fordham University and when not attending a Yankees, Rams or Cougars game can be reached at Jerry (at) JerryMilani (dot) com.
@gbpackjerry
Previous Reality TV Stars and INDYCAR Drivers, James Hinchcliffe and Alexander Rossi, Launch New Podcast
Next MLB, Facebook partner for weekly broadcasts