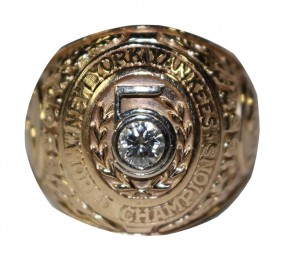 The treasure trove of memorabilia, called by Steiner “our biggest auction in history,” that includes 2,500 gems for collectors highlighted by Berra’s 1953 World Series Championship ring, which was the only one of his 10 title rings that the legend actually wore after winning five straight Fall Classics from 1949 through 1953; as well as both his National Baseball Hall of Fame ring and plaque which were presented upon his induction in 1972, and a vintage,1961 game-used, home pinstripe #8 jersey; Larsen’s “Babe Ruth Award,” which was presented to the hurler as the 1956 World Series Most Valuable Player in recognition of his historic Fall Classic performance, heads the Larsen lot.

Berra’s sons Larry, Tim and Dale Berra decided to give their father’s legion of fans the chance to own a piece of history. “It is a pleasure and honor for the Berra family to share dad’s history with his many followers,” said Dale Berra, “because they are responsible for his legacy.”

“His ’53 championship ring is a real collector’s item because it has a diamond ‘Five’ on it,” added Dale. “It was given to the few players like dad and Phil Rizzuto who had won five World Series in a row. That’s a very special piece.”

Many of the Larsen pieces are connected to his 1956 World Series Perfect Game, including a 1956 letter from President Dwight D. Eisenhower, and 2006 letters from Governor George Pataki and Mayor Rudy Giuliani of in celebration of the 50th Anniversary of the “Perfecto.”

Jerry Milani is a freelance writer and public relations executive living in Bloomfield, N.J. He has worked in P.R. for more than 30 years in college and conference sports media relations, two agencies and for the International Fight League, a team-based mixed martial arts league, and now is the PR manager for FAN EXPO, which runs pop culture and celebrity conventions across North America. Milani is also the play-by-play announcer for Caldwell University football and basketball broadcasts. He is a proud graduate of Fordham University and when not attending a Yankees, Rams or Cougars game can be reached at Jerry (at) JerryMilani (dot) com.
@gbpackjerry
Previous Topps® Releases Rocky 40th Anniversary Complete Collectible Trading Card Set
Next Munich ’72 and Beyond Wins Best Documentary at LA Shorts Fest