Home / Book Reviews / From Lambeau To Rodgers, New Packers Book Has It All For GBP Fans

From Lambeau To Rodgers, New Packers Book Has It All For GBP Fans

Jerry Milani November 13, 2019 Book Reviews, News Comments Off on From Lambeau To Rodgers, New Packers Book Has It All For GBP Fans 1,191 Views 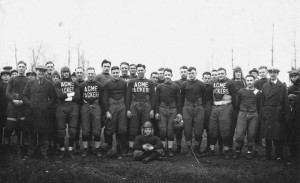 Green Bay is, in a word, unique among NFL cities. Besides having a few hundred thousand or a few million or so fewer residents in its metropolitan area, it’s the one holdover from a very different time in pro football’s history. And with the 100th anniversary of the then-Acme Packers, famously named for the company that bought the team’s original equipment provider, the Indian Packing Company (meat “Fresh from Sunshine and Pure Air,” an early ad read), upon us, it’s a perfect time to look back at a franchise that has, against all odds, survived as a true “People’s Team.”

Which brings us to a fantastic new work, People’s Team: An Illustrated History of the Green Bay Packers (Houghton Mifflin Harcourt, 395 pps., $35.00) by Mark Beech, which at first glance looks like a coffee table book but in truth is a thorough look at the ups and downs that have marked the century of perhaps American sports’ most improbable franchise.

Even devout, longtime Packers fans—at about four decades of fandom I pronounce myself guilty as well—will find tons of interesting and new information and stories, particularly about the turbulent early years, when several calamities including a lawsuit brought by a fan who fell from the stands, torrential rains that limited attendance and a painful but necessary separation of Curly Lambeau himself from the team he did so much to save, almost spelling doom numerous times.

It’s from the hardships that the Packers became the “People’s Team.” Campaigns to save the franchise with stock sales and benefit games strengthened the bond between city and team, and fans to this day proudly display their certificates, from the original issue in 1923 and the four subsequent sales. Though the only tangible benefit is a vote in the annual meetings, the tie to the franchise that ownership of stock brings is far more valuable to these fans. 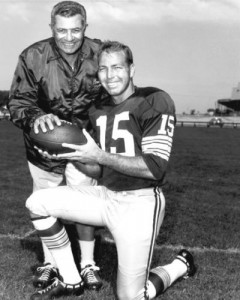 The Vince Lombardi era is well-covered turf—dozens of books on the Ice Bowl and how the New Yorker became a hero in faraway Wisconsin have their place in the pantheon of Packers scholarship. While People’s Team adds to discussion of Lombardi, it is the chapters on the early years that readers may find the most fascinating. It seems like a miracle that somehow, when small to mid-sized cities like Duluth, Canton, Dayton and Rock Island lost their teams, little Green Bay somehow made the cut when the league trimmed its numbers, all but eliminating the town squads.

Well-known, colorful characters like Lambeau, Lombardi, Reggie White and Brett Favre get an appropriate amount of attention in People’s Team, but another area that the book really shines is its illumination of some of the stars that most Packers fans have forgotten: Johnny Blood, Cal Hubbard, Verne Lewellen, Clarke Hinkle; and the founders not named Lambeau whose contributions have been swallowed in the history that tended to give Curly an outsized portion of the credit.

And while the 70s and 80s were mostly a barren time for the franchise, on and off the field, the era between the coaching reigns of Lombardi and Mike Holmgren had more than a few stories, and while it may make Packers fans cringe a bit (how many draft picks did Dan Devine trade for pot-bellied John Hadl?), they’re worth reliving, especially when we know the ending—light at the end of the tunnel with names like Favre, White, Sterling Sharpe and Aaron Rodgers bringing two more Super Bowls back to Titletown.

But People’s Team is far from hagiography; the coaching tenures of Devine, Bart Starr and (especially) Forrest Gregg get matter-of-fact treatment, and discussion of the less-than-ideal end to the Holmgren era is tinged with a what-could-have-been feel.

Packer backers will delight in the additional essays by Peter King, Ice Bowl hero Chuck Mercein, Austin Murphy and David S. Neft, which add depth to the detailed narrative. And while the dozens of beautiful photographs and larger page size will make the book a nice addition to a coffee table, fans owe it to themselves to savor every word first.

Jerry Milani is a freelance writer and public relations executive living in Bloomfield, N.J. He has worked in P.R. for more than 30 years in college and conference sports media relations, two agencies and for the International Fight League, a team-based mixed martial arts league, and now is the PR manager for FAN EXPO, which runs pop culture and celebrity conventions across North America. Milani is also the play-by-play announcer for Caldwell University football and basketball broadcasts. He is a proud graduate of Fordham University and when not attending a Yankees, Rams or Cougars game can be reached at Jerry (at) JerryMilani (dot) com.
@gbpackjerry
Previous Aaron Donald Grows His Investment Footprint Into Nutrition
Next Ben Affleck To Star in Hoops Film ‘The Way Back,’ Releasing In March