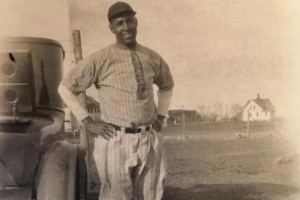 When fans think of the greatest players in baseball history who were denied the opportunity to play in the majors in the pre-Jackie Robinson era, several notable names come to mind. Josh Gibson, Cool Papa Bell, Oscar Charleston, Buck Leonard and Buck O’Neill, along with Satchel Paige and Monte Irvin, who were able to finish their careers in MLB, are among the most recognized.

But John Donaldson? It’s the rare fan that has heard of the sleek lefthander whose many exploits pre-dated most video and strict record keeping and whose stories have been largely lost to history. Until now.

Paul Irmiter is set to change all that, as he and his company 612im are producing the film 39 Seconds, to shed some light on a player who was once dubbed “The Greatest Colored Pitcher in the World” and later became a major league scout.

Donaldson’s “official” statistics, per Baseball-Reference, credit the southpaw with just a pedestrian 23-20 record and 3.46 ERA over six seasons on various Negro League teams from 1916 through 1921. But further research, much of it by executive producer Peter Gorton, has Donaldson winning more than 400 games, fanning more than 5000 in games in more than 550 towns and cities across North America.

The film’s title comes from the 39 seconds of extant film that shows the superstar in action. It’s grainy, but from the snippet, it’s clear how Donaldson could be such a dominant force.

Irmiter, serving as director, and Gorton are joined by writer Zachary Bernard and editor Dane Whitehead in the effort, a joint venture between 612im and The Donaldson Network. The team plans to release the film in the summer of 2018.

Jerry Milani is a freelance writer and public relations executive living in Bloomfield, N.J. He has worked in P.R. for more than 30 years in college and conference sports media relations, two agencies and for the International Fight League, a team-based mixed martial arts league, and now is the PR manager for FAN EXPO, which runs pop culture and celebrity conventions across North America. Milani is also the play-by-play announcer for Caldwell University football and basketball broadcasts. He is a proud graduate of Fordham University and when not attending a Yankees, Rams or Cougars game can be reached at Jerry (at) JerryMilani (dot) com.
@gbpackjerry
Previous Topps Creates Global Sports & Entertainment Division
Next A Different College Football Top 10: The Most Exciting, With The Data To Prove it