Home / News / A Different College Football Top 10: The Most Exciting, With The Data To Prove it

A Different College Football Top 10: The Most Exciting, With The Data To Prove it

Jerry Milani December 22, 2017 News Comments Off on A Different College Football Top 10: The Most Exciting, With The Data To Prove it 3,193 Views 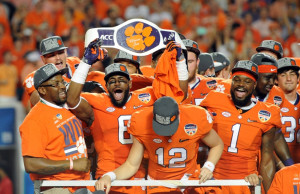 The college bowl season drones on with not great fanfare until we get to the Christmas week games followed of course by the excitement of the College Football Playoff starting New Year’s Day. However even with the semi-endless stream of matchups that people may care about only as alums and parents, and the occasional NCAA junkie, there is no doubt that the past year has again produced the kind of excitement in and around college football that has made it such a mega draw in towns bug and small.

How exciting, well there is a way to measure the breathtaking moments, brought to us by the folks at Bay area based Thuuz (short for “enthused). Don’t know Thuuz at all? Well if you are a fan of quick, custom highlights you will probably know them more as they aggressively expand their business in the coming months, but their custom data capture is fast making the idea of “Catch Up To Live,” think your own custom NFL Red Zone that gives you your highlights but also quickly catches all the highlights you want as you try and grab a game in the third quarter, all delivered to you on whatever device you choose.

Those are some of the things that Thuuz is doing with partners like FOX, NBC Sports and Direct TV, with more to come.

But back to exciting college football. Another aspect of their business is measuring with data the excitement level of sporting events. Using a designed tool called the SSMP; A “Subjective Sports Metadata Platform,” Thuuz evaluates live game action from six different perspectives:

As a game progresses, they are continuously updating these parameters and comparing them to a historical database of game parameters that has a statistical understanding of what comprises a Great Game, Good Game, Average Game, and Dull Game. From this, they identify the most exciting aspect of the game in order to construct a headline describing the real-time state of the game.  Additionally, they are constantly monitoring the changes in excitement to determine when to send out alerts for different types of fans, from fanatics to enthusiasts, to casual fans all of which are giving the fans an up to the minute highlight package customized to them.

So college football fans, what got you on the edge of your seats this year? Here is the list, one which leads with no surprise, but has some games you may have missed in the mix.

So is all this subjective data needed? Experts in the space think so, as it can help tailor programming, ad buys and most importantly, audience engagement not just for teams and leagues (Thuuz does this for almost any league or sport  where a wide amount of games  are carried) but for fans looking to engage on any device at any time with whatever content they would enjoy.

“In the past there has been a great deal of guesswork as to what fans really wanted and we all hoped Nielsen was the best way to see the biggest audience,” said Chris Lencheski, a longtime marketer and head of North America for the sports rights firm MP & Silva. “Now we can use data like this, tied to ratings to actually know what fans really love, and turn around and give them exactly what they like down to their favorite players, plays and moments. Custom content is evolving and it’s a platform like this that will push evolution forward.”

We often say when we are at the big event we can “feel the excitement in the air.” Now with a company like Thuuz, we can measure it as well.

Jerry Milani is a freelance writer and public relations executive living in Bloomfield, N.J. He has worked in P.R. for more than 30 years in college and conference sports media relations, two agencies and for the International Fight League, a team-based mixed martial arts league, and now is the PR manager for FAN EXPO, which runs pop culture and celebrity conventions across North America. Milani is also the play-by-play announcer for Caldwell University football and basketball broadcasts. He is a proud graduate of Fordham University and when not attending a Yankees, Rams or Cougars game can be reached at Jerry (at) JerryMilani (dot) com.
@gbpackjerry
Previous Film To Remember Early Negro League Star Donaldson
Next National Lacrosse League Announces Partnership with Facebook Watch