Home / News / Ben Affleck To Star in Hoops Film ‘The Way Back,’ Releasing In March

Ben Affleck To Star in Hoops Film ‘The Way Back,’ Releasing In March

Jerry Milani November 14, 2019 News Comments Off on Ben Affleck To Star in Hoops Film ‘The Way Back,’ Releasing In March 952 Views 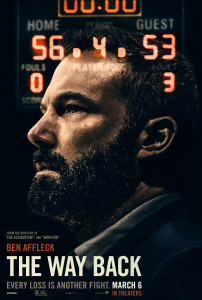 Looking to join the pantheon of classic basketball-themed films (Hoosiers, Glory Road and Coach Carter come to mind, though it’s been a while since a really good one has come out), Ben Affleck is set to star in The Way Back, due in theaters from Warner Bros. in March.

In the film, Affleck’s Jack Cunningham once had a life filled with promise. In high school, he was a basketball phenom with a full university scholarship, when suddenly, for reasons unknown, he walked away from the game, forfeiting his future. Now years later, Jack is spiraling down, triggered by an unspeakable loss, and drowning in the alcoholism that cost him his marriage and any hope for a better life.

When he is asked to coach the basketball team at his alma mater, which has fallen far since his glory days, he reluctantly accepts, surprising no one more than himself. As the boys start to come together as a team and win, Jack may have finally found a reason to confront the demons that have derailed him. But will it be enough to fill the void, heal the deep wounds of his past, and set him on the road to redemption?

Jerry Milani is a freelance writer and public relations executive living in Bloomfield, N.J. He has worked in P.R. for more than 30 years in college and conference sports media relations, two agencies and for the International Fight League, a team-based mixed martial arts league, and now is the PR manager for FAN EXPO, which runs pop culture and celebrity conventions across North America. Milani is also the play-by-play announcer for Caldwell University football and basketball broadcasts. He is a proud graduate of Fordham University and when not attending a Yankees, Rams or Cougars game can be reached at Jerry (at) JerryMilani (dot) com.
@gbpackjerry
Previous From Lambeau To Rodgers, New Packers Book Has It All For GBP Fans
Next NASCAR and NBC Sports To Launch ‘TrackPass On NBC Sports Gold’