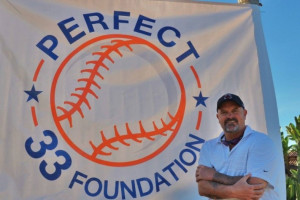 With the 2018 Major League Baseball season now underway, three-time All-Star and two-time World Series champion left-handed pitcher David Wells has more on his mind than balls and strikes. Wells recently joined long-time San Diego radio shock-jock and talk-show host Chris Cantore on his Yew Online podcast to talk about CBD, also known as Cannabidiol, to discuss how it’s helped him stave off the constant pain and sleepless nights that resulted from a 21-year career pitching in the major leagues.

“I was having a hard time sleeping, literally having a hard time sleeping because my shoulder was so bad,” Wells told Cantore. “I knew I had a torn labrum but I didn’t get it fixed, I didn’t go to the doctor just for anything like that because I was playing so much golf…So finally when I was having trouble sleeping, (a friend) said take the other half and go home tonight and before you go to bed, smoke the other part and see how you sleep tonight, and I went home and had the best night sleep. It was unbelievable.”

Known by teammates throughout his major league career as “Boomer,” Wells is a Southern California native who currently resides in San Diego’s Ocean Beach community. The 54-year-old Wells began his career with the Toronto Blue Jays in 1987 and went on to pitch for the Detroit Tigers, Cincinnati Reds, Baltimore Orioles, New York Yankees, Chicago White Sox, San Diego Padres, Boston Red Sox and the Los Angeles Dodgers during his 21-year playing career. Wells pitched thousands of innings during his major league career as he racked up a 239-157 record, with a 4.13 earned run average and 2,201 career strikeouts. Wells, who once pitched a perfect game on May 17, 1998, spoke to Cantore about his reliance on opiates during his playing career.

“I was taking Percocet, and for a while I was eating them like skittles,” explained Wells. “Luckily for me, I don’t have an addictive personality when it comes to opiates or anything like that, I can quit whenever. But for a while in my playing days I was taking them a lot because my back was killing me.

“In my case, I was taking Percocet before I pitched. Like an hour before I pitched I’d take it and then I would take them after, but my thing, I did Cortisone shots. Cortisone is king of anything. During my career I would take Cortisone shots in my lower back because I was pitching so well and I’d take Percocet on top of it and it was something that I didn’t even know about CBD. It was there, but nobody really knew about it. If I did, I would have never taken the opiates.”

Wells was initially introduced to CBD by a friend. According to the website Project CBD (https://www.projectcbd.org/about/what-cbd), “CBD is a cannabis compound that has significant medical benefits, but does not make people feel ‘stoned’ and can actually counteract the psychoactivity of THC. The fact that CBD-rich cannabis is non-psychoactive or less psychoactive than THC-dominant strains makes it an appealing option for patients looking for relief from inflammation, pain, anxiety, psychosis, seizures, spasms, and other conditions without disconcerting feelings of lethargy or dysphoria.”

Wells went on to tell Cantore about his introduction to CBDs.

“I never thought about opiates in that sense but I know the damage opiates can do to you so that’s basically what I was dealing with all those years…once I got on this, even with my back pain and my shoulder pain, and I’m arthritic from 26 years of professional baseball, a little over eight years ago, I got on CBD and I haven’t touched anything (since). I don’t take Ibuprofen anymore, I haven’t taken a painkiller in over eight years. CBD has been part of my life…For me, it’s been a blessing in disguise and I’m trying to let the whole world know because CBD is legit because people do have addictive personalities.

To learn more about Wells and his use of CBDs, the full Yew Online podcast is available here.

Jerry Milani is a freelance writer and public relations executive living in Bloomfield, N.J. He has worked in P.R. for more than 30 years in college and conference sports media relations, two agencies and for the International Fight League, a team-based mixed martial arts league, and now is the PR manager for FAN EXPO, which runs pop culture and celebrity conventions across North America. Milani is also the play-by-play announcer for Caldwell University football and basketball broadcasts. He is a proud graduate of Fordham University and when not attending a Yankees, Rams or Cougars game can be reached at Jerry (at) JerryMilani (dot) com.
@gbpackjerry
Previous The Sports Circus Radio Show Extends To Honolulu
Next Union, Wade Team For ‘All-Star Flip’