What’s In a (Baseball) Name? 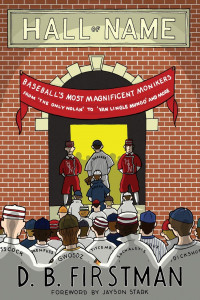 In 1969, singer and lyricist Dave Frishberg released a novelty song called “Van Lingle Mungo,” an amalgam of baseball names, some famous, some lesser-known, that fit a comfortable if slightly forced-sounding rhyme. And though it isn’t going to make any lists of greatest all-time tunes, or even baseball-themed songs, it is an acceptable example of baseball names in pop culture.

D. B. Firstman’s new book Hall of Names: Baseball’s Most Magnificent Monikers (DB Books, 312 pps.) makes significantly better use of the Orval Overalls, Jack Glasscocks, Mark Lemongellos and more than 100 other names of note, giving readers not just a list of unusual monikers but the etymology of the first, last and middle names, a biography, and some fun lagniappes like similar “not to be confused with” figures and an anagram or two from the letters of their names.

Firstman’s style is light, but each entry is packed with information. There are many players with whom only the most ardent fans will be familiar, and plenty of others who readers may recall fondly from their early years of their fandoms but had not though of recently (for me, whose first exposure to the game was in 1977, Larvell Blanks, Biff Pocoroba and Joe Zdeb were pleasant inclusions).

It is for the etymologies that Hall of Name really stands out. From common first names like William, Charles and John, to the most obscures surnames such as Lowdermilk, Robideaux and Mmahat, to the more whimsical like Krapp, Horsey and Drungo, reading about the origins is often fascinating, sometimes quite funny but nearly always interesting.

And while there is a loose structure in categorizing the types of names and a tighter one in presenting the information for each entry, the reader feels like just about anything can come next. There’s a little repetition in the first names (“see also” for all of the Jims and Joes and Johns might have made for less), but the length of each entry varies, a strength of the book since it allows Firstman to tell that story commensurate with its depth of interest.

The variety of time frames from which the players are pulled is also a highlight. While there are plenty of “old-timey” names, which seem to be inherently more interesting, this isn’t just a compilation of funny names from more than a century ago; there are plenty that more recent fans will know as well.

Shakespeare may not have had baseball players in mind when his Juliet asked, “What’s in a name?” And Pete Rose, John Montague and Enrique Rom(e)o may not have made this edition, but by any other name, Hall of Name would read just as sweet.

Jerry Milani is a freelance writer and public relations executive living in Bloomfield, N.J. He has worked in P.R. for more than 30 years in college and conference sports media relations, two agencies and for the International Fight League, a team-based mixed martial arts league, and now is the PR manager for FAN EXPO, which runs pop culture and celebrity conventions across North America. Milani is also the play-by-play announcer for Caldwell University football and basketball broadcasts. He is a proud graduate of Fordham University and when not attending a Yankees, Rams or Cougars game can be reached at Jerry (at) JerryMilani (dot) com.
@gbpackjerry
Previous Strat-O-Sons Top Dads, Four Games To Three, In Father’s Day Inspired Series
Next ‘Yogi’ Author Jon Pessah To Host Live Q&A Thursday At Wizard World Virtual Experiences