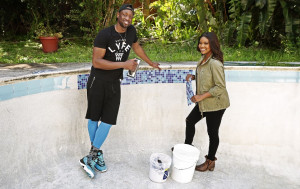 Actress, producer and best-selling author Gabrielle Union and three-time NBA Champion, producer and best-selling author Dwyane Wade will take a break from their day jobs to complete a major home transformation in a new HGTV special, All-Star Flip. In a surprising twist for the famous couple’s fans, Gabrielle and Dwyane will showcase their love of home renovation as they buy, overhaul and flip a fixer upper in an up-and-coming Miami neighborhood. The half-hour special will premiere Thursday, April 12, at 9:30 p.m. ET/PT.

“Ever since we renovated our house a few years ago, I’ve been a little real-estate obsessed,” said Gabrielle. “It took a while, but I finally convinced Dwyane that we should try flipping a house.”

“And we’re doing it to raise money for charity,” added Dwyane. “So how could I say no?”

During the special, Gabrielle and Dwyane will join forces with their construction team to gut an outdated ranch house and add square footage and value to the property with a grand second-story master suite. They will transform the home into a sleek, modern showplace, and, in the end, the proceeds of the sale will go to a charity of the couple’s choice.

Fans can visit HGTV.com for more information about the special and can interact on social media using #AllStarFlip.

Jerry Milani is a freelance writer and public relations executive living in Bloomfield, N.J. He has worked in P.R. for more than 30 years in college and conference sports media relations, two agencies and for the International Fight League, a team-based mixed martial arts league, and now is the PR manager for FAN EXPO, which runs pop culture and celebrity conventions across North America. Milani is also the play-by-play announcer for Caldwell University football and basketball broadcasts. He is a proud graduate of Fordham University and when not attending a Yankees, Rams or Cougars game can be reached at Jerry (at) JerryMilani (dot) com.
@gbpackjerry
Previous Former All-Star Pitcher Wells Talks CBDs, Opiate Addiction On Podcast
Next Daniel Suárez and STANLEY Team to Race for $1 Million at Texas